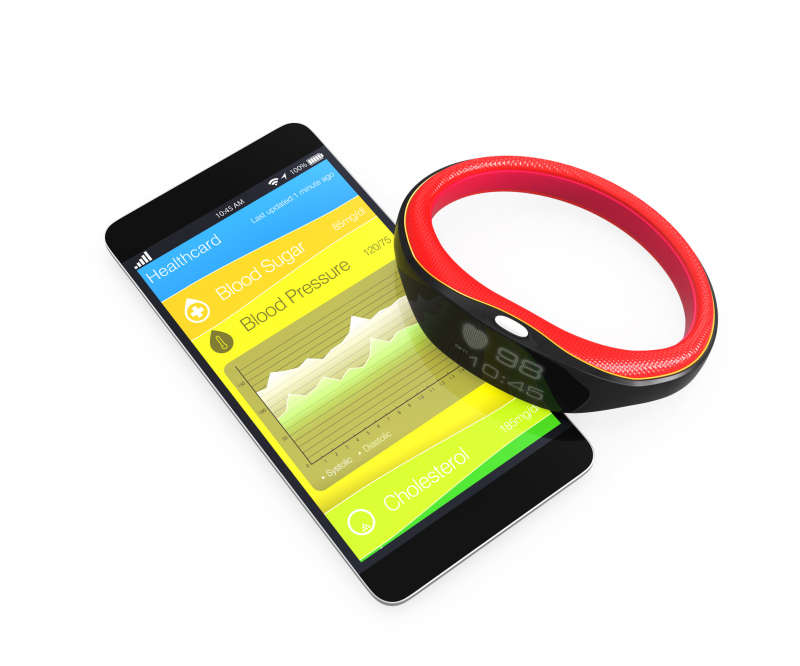 This is a text

"The FCC has already set aside protected broadband spectrum for medical devices known as 'medical body area networks' to allow gathered data to be sent wirelessly," Dorsey says. "The various agencies, like Health and Human Services, got behind this technology in a big way early on, unlike with the internet where they tried to regulate after the fact."

Surprisingly for healthcare, the hold-up does not derive mainly from HIPAA security issues. Mobile devices can already securely transmit sensitive data, such as from a banking app to the bank, and clinical systems are already capable of securely receiving the data. "The HIPAA compliant technology already exists," Dorsey says.

The delay in connecting patients' wearable devices to the physicians' clinical systems rests more in the current lack of standardized intermediaries. Before widespread adoption occurs, companies need to evolve that can gather data from a wide variety of these devices and securely upload it to diverse clinical systems. "Like the intermediaries we have now for third-party payers and prescription drugs," Dorsey says.

Already, a small device called Propeller connects to asthma inhalers and records the time, dosage and location when the patient uses their inhaler. Paired with a phone app, the data displays to the patient and, through a website, to the physician. The company reports that access to that precise data has resulted in patients using their rescue inhalers up to 80 percent less within a year and 50 percent more asthma-free days.

Through Apple Watch wristbands, Kardia takes medical-grade, single-lead EKGs and tracks palpitations, shortness of breath, dietary habits, sleep and exercise patterns. A credit card-sized version can also attach to the back of a smartphone or tablet for the patient to touch. Besides displaying the data on a phone, it can instantly detect atrial fibrillation and/or normal heart rhythm and communicate the results directly to a physician through email or online access.

"The idea is that your phone becomes an extension of your care into your home, so these devices gather clinical information that's actionable," Powell says. "Or providers can gather data on patients who are missing appointments because they're not doing what they're supposed to."

Incentives for management of chronic illnesses already exist. "This monitoring would be part of the treatment plan," Powell says, allowing physicians to earn reimbursement without having to see the patient.

Healthcare is already embracing the decline of in-office visits. This year, Blue Cross began paying providers to treat patients at other healthcare facilities through the internet using secure video streaming. It approved 80 sites throughout Alabama for services in outpatient cardiology, behavioral health, dermatology, infectious diseases and neurology. This is a boon to rural areas where specialists can be out of reach.

In east Alabama, psychologists have been conducting counseling sessions to about a dozen public health centers through high-quality video conferencing equipment. "The people can come in to the health center instead of driving hundreds of miles to see a therapist," Dorsey says. "They've been doing this for over five years and have a very good success rate."

Powell, who lives in Birmingham, signed up with Blue Cross for less than $10 a month to have access to telehealth. "You don't pay a copay," he says. So a few telehealth visits could save $80 or more in copays plus time-off for a doctor's appointment. "If you're congested and get an annual respiratory infection and know you just need a Z-Pack, you can call instead of having to do an office visit."

To access the service, the patient calls the number and states whether they need a prescription or a consultation. "For a prescription, you need someone licensed in your state," Powell says.

He was connected to a physician in Monroeville, Alabama. "This means tech is allowing physicians to monetize their downtime," Powell says, especially rural physicians who have limited local patient pools.

Remote access, instantaneous data, and increased revenue potential are quickly motivating tech connections between physicians and patients. "I think it will become commonplace sooner than later," Powell says. "We think this kind of thing takes forever, but iPhones only existed for the last eight years. Think how much has changed with that technology in those few years."