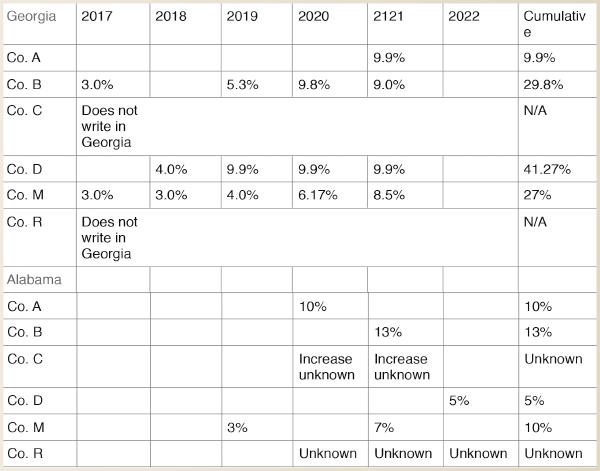 There is no question that professional liability premiums have risen significantly in Alabama over the past two to three years. We are currently in what is referred to as a 'hard' market in the insurance world. Losses are up, capacity is down, reserves are down, discounts are shrinking, profitability is down, and therefore prices are increasing.

Before we examine what is happening in Alabama, let's take a look at Georgia. Because Georgia is next door to Alabama and is the most similar to us, what happens there has somewhat of an impact on what happens here. National carriers know that Alabama isn't Florida. We also cannot be compared to Mississippi because that state's legislature has written some unique laws in order to back the company that writes the majority of business there. The same is true with Louisiana. So from a national perspective, Alabama and Georgia most closely resemble each other.

Not surprisingly, four of the top six professional liability carriers that write in Alabama also write in Georgia. This chart will give you an idea of recent history of rate increases in the two states:

The market was soft from the mid to late 2000's through 2016/2017. In Georgia, especially, there was a nasty price war where rates tumbled, discounts were given liberally, as all the insurers wanted to increase market share through attractive pricing. The same was true to a lesser degree in Alabama.

2017 saw the beginning of the end of this soft market, as insurers began to see disturbing numbers in their bottom line and their suddenly declining surplus. One of the major insurers in Georgia experienced a drop in their surplus of almost $250 Million dollars from 2017 to 2020. Under-pricing and surprisingly bad trial results (one verdict alone was for $46 Million) resulted in the alarm bells going off for that company, as well as others in the market.

Meanwhile, the same was happening in Alabama. Less premium income and increased losses in the courtroom (the largest was $30 Million) made Alabama more volatile than ever before. As you can see from the chart above, insurance companies flocked to the Alabama Department of Insurance to file for rate increases. Alabama trailed Georgia in the timing of the onset of those increases and I do not believe we have seen the last of them.

Every provider, practice manager, and hospital CEO/CFO needs to ask themselves when they should proactively respond to the continuing rate increases. There are several questions to consider in order to determine if you are with the best company for your practice, and to decide whether you should pay the increased price to stay with your current insurer or look at alternatives.

Any legitimate consultant or agent will tell you that if you have not compared companies, rates, and options in the last few years, you are doing yourself a disservice. The answers to all these questions can be determined by a consultant/agent who will analyze the information for you. If you are with a carrier direct, (no independent consultant/agent involved), then you don't have an unbiased independent consultant/agent, you have a company representative. A company representative cannot objectively analyze the pros and cons of the other potential carriers.

Every practice and every hospital should have a consultant/agent who will compare all of the important criteria and render an honest analysis of what you currently have, and what the options and alternatives are.