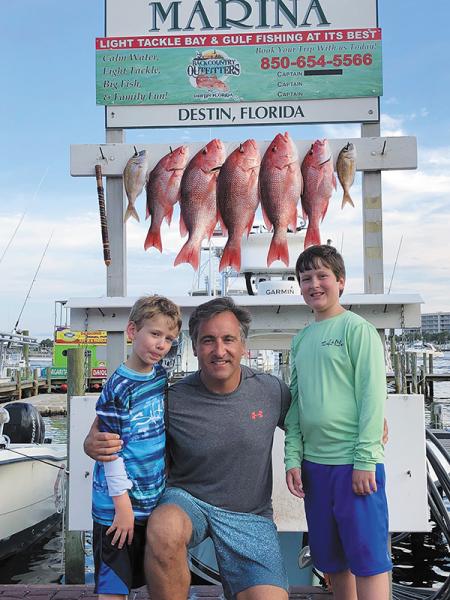 Fieno and his sons enjoy fishing in the Gulf of Mexico.

The story begins with a young electrical engineering grad fresh out of Ohio University with a double major in chemistry. It was the late 90s, and he was on the road to a PhD in biomedical engineering with no clear aim. "Then I was paired with a guy who studied the heart and, week one, I saw open-chest heart surgery," says David Fieno, MD, PhD. "Everything I studied became applicable--there was this electrical thing that was also a mechanical thing; the beautiful simplicity of it, the timing of the beat. I fell in love with the heart that day."

Fieno then spent his next four years of grad school assigned to a mechanical engineering project that worked toward devising an MRI for the heart. "Whereas other students on the project were into the computer doing equations, I was the guy who had the hands-on part seeing patients inside the hospital. And that led to me being able to contribute to that field," he says.

At the time, the MRI produced dynamic, crisp images of the heart. "It was beautiful but not good for anything," Fieno says. "It only confirmed what we already knew from ultrasound, but in prettier pictures." And it cost about $5,000 per test.

So Fieno's team began focusing on the aspect of the MRI that, unlike any other imaging tech, allows it to provide entirely new data based on how the machine acquires the image. "How you adjust parameters can make the image look entirely different," he says.

Gadolinium proved to be the breakthrough. "We took the same images of the moving heart, but we administered a contrast agent," Fieno says, adding that gadolinium-based contrast agents are given thousands of times a day to MRI patients everywhere. "It turned out that it accumulated in the dead area of the heart and made them brighter on the images." They went on to develop a way to image those bright and non-bright areas.

"It was the first time in cardiac history that you could see the exact size of the dead muscle and relate it back to the moving heart," he says. "There is no other tech that could do that."

The gadolinium-enhanced imaging is now considered to be the gold standard for myocardial viability to determine which parts of the heart are alive or dead. "Other techs provide clues but they cannot tell you what's viable and not viable," Fieno says.

But even with this accomplishment, Fieno knew engineering wasn't for him. "I could do the work, but I didn't love it," he says. "My last two years on the project, I got to work with clinical trials and realized that was my true calling. I fell in love with patient care."

So after attaining his engineering PhD, he entered medical school at Northwestern. Three years later, in 2003, he headed to California and completed his residency in internal medicine at Cedars-Sinai Hospital and stayed another three years for a fellowship in cardiology and cardiovascular diseases.

Then in 2010, he decided to make a major switch, and moved to Birmingham to join Heart South Cardiovascular, a group affiliated with Shelby Baptist Medical Center, which recently acquired a cardiac MRI at the end of last year.

Fieno admits his move to the south after seven years on the California coast was spurred by a call to be needed. "LA is beautiful and absurdly expensive, and there are way too many cardiologists there," he says. "At Cedar Sinai alone, 260 cardiologists had privileges. There are not 260 cardiologists in the state of Alabama. So the move gave me a challenge of not knowing the landscape and how people interacted, but I was where people needed my help."

Fieno is a seeker of new experiences. He has recently branched out to appear on local news and talk shows to discuss heart health. He also learned to ski last year, and took up ballroom dancing. "I was in my first competition last weekend. I was terrified," he says. "I performed 12 dances. I have two left feet, so this was a big digression from what was comfortable for me. But I placed second in my little category."

He's instilled that same sense of adventure in his young sons, who he has gotten hooked on deep-sea fishing. "Now they are obsessed with catching their first grouper and sailfish," he says.

And his endless stretching of his own limits has led him to pick up the traditional doctors' sport of choice, golf. "It takes skill," Fieno says. "You end up finding out how good you are at something where you're not comfortable." That is something that Fieno seems to crave. "I think everyone, every so often, needs to challenge themselves and step outside their comfort zone."