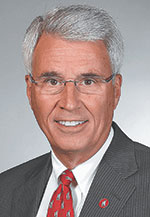 Warren previously served as chairman and CEO of Energen Corp. Before that, he practiced law with Bradley, Arant, Rose & White. He served 22 years on the Children's of Alabama board of trustees before he was named the hospital's CEO.

Under Warren's leadership, Children's of Alabama has grown both in size and standing.

In 2010, six of the hospital's programs were ranked for the first time among the nation's best children's hospitals by U.S. News & World Report. The most recent ranking, released in June 2020, marked the 11th consecutive year that Children's has been included.

Warren has also served as chairman of the Business Council of Alabama, the United Way, Leadership Birmingham and Leadership Alabama as well as the Metropolitan Development Board and the area American Heart Association. He has twice chaired the general campaign for the United Way and the United Negro College Fund. In 2004, Warren was inducted to the Alabama Academy of Honor.

Tom Shufflebarger joined Children's in 1992, having previously served as the budget director and director of physician recruitment and development for Brookwood Medical Center. He is an honors graduate of Duke University, where he earned both a Bachelor of Arts in economics and a Master of Business Administration. He is a Fellow of the American College of Healthcare Executives and has served as a trustee of the Alabama Chapter of the American Hospital Association. He is chairman of the Child Health Patient Safety Organization, an affiliate of the Children's Hospital Association.