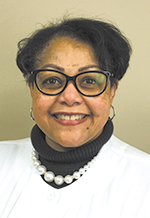 A nurse executive with over 25 years' experience, McGrue began her career in Talladega in 1992 at the Northeast Alabama Kidney Clinic and previously worked for Citizens Baptist Medical Center for several years in the late 1990's.

Following a decade in private healthcare administration with oversight of territories in Alabama, Georgia, and Tennessee, McGrue rejoined Citizens Baptist in 2009 as the infection preventionist before assuming the role of director of outcomes, where she was pivotal in improving reimbursement by six percent within six months following the implementation of the CDI program. She later served as management director of nursing for Medical Surgical where she contributed toward achieving the highest improvement in Hospital Consumer Assessment of Healthcare Providers and Systemsat Citizens Baptist in 2015.

Preceding her appointment as CNO of Citizens Baptist, she served as Director of Quality where she was instrumental in helping the hospital to achieve its first status quality goal, earning the number one ranking among Tenet hospitals for quality for four consecutive months.

The Alabama Department of Public Health has awarded the University of Alabama at Birmingham nearly $2 million to support the establishment of the Alabama Regional Center for Infection Prevention and Control (ARC IPC).