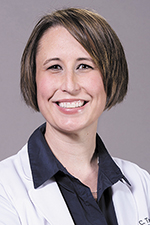 Colleen Tobe-Donohue, DO was recently elected president of the Alabama Academy of Family Physicians (AAFP).

Tobe-Donohue has been in private practice in Birmingham since 2011. She received her undergraduate degree from Samford University and earned her medical degree from Pikeville University School of Osteopathic Medicine in Pikeville, KY. She completed her residency at St. Vincent's East Family Medicine program in Birmingham.