When a patient presents to the emergency room with cellulitis--a soft tissue infection--they often end up admitted to the hospital for an average stay of around 3.8 days. Not because they need physical care, but because they need oversight of the intravenous antibiotic treatments, typically vancomycin. The cost in 2016 in Florida for that stay averaged $29,642.

"But instead of going that route, they could get an outpatient infusion and be done in a few hours," says Joseph Williams, RN and practice administrator at Birmingham ID and Infusion. "This also requires treatment with an antibiotic, but it's with Orbactiv, a much stronger version of the antibiotic used in most hospitals."

Produced by Melinta Therapeutics, Orbactiv (oritavancin) was approved by the FDA in 2014 and reigns as the first single-dose regimen for treating acute bacterial skin and skin structure infection (ABSSSI).

This includes cellulitis, which manifests as swollen, red skin that is typically painful and warm to the touch. Though it usually appears on the lower legs, it can afflict most anywhere, especially the face and arms. Left untreated, this bacterial infection can spread to the lymph nodes and bloodstream, and become life-threatening.

The infusion of Orbactiv offers a multitude of advantages beyond the one-dose treatment. Unlike vancomycin, it requires no testing and dosage adjustments to find the therapeutic level. "Also, a lot of antibiotics have liver function or renal function issues and have to be increased or decreased based on that," Williams says. "But there are none of those problems with Orbactiv, not even adjusting for the patient's weight."

The only issue is the cost. Orbactiv runs an estimated $3,000 per treatment just for the drug. "Hospitals have a budget and hesitate to add an expensive drug to their formulary that can use up a large part of their budget," Williams says. 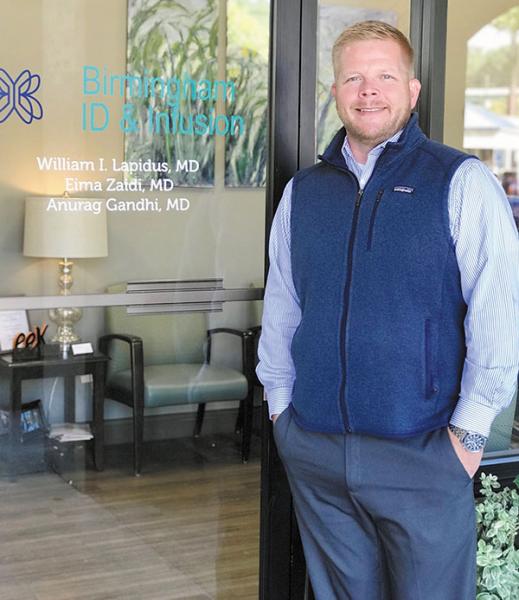 But Birmingham ID and Infusion offers hospitals the option to refer emergency room patients to their outpatient clinic for the one-time treatment, which allows the infusion clinic to be the order source for the pricey drug.

The emergency room referral process is simple. "The ER doctor consults with one of our doctors over the phone or through secure messaging," Williams says. Then later that day or--if it's after business hours--the following day, the patient arrives at the infusion clinic for a quick consult to confirm the diagnosis. "We check their benefits and then get them right in for the three-hour infusion," Williams says. "That takes the place of a three-to-five-day hospital stay, and it's about $3,500 versus $10,000."

Though a second dose of the antibiotic can be administered one to two weeks later, if needed, two separate trials showed a 92 percent success rate after the initial dose of Orbactiv.

"Three weeks ago, we got our first consult at 9:00 p.m.," Williams says. "We notified staff through messaging that a patient would be coming in the next morning. He was immediately seen, treated, and out by lunch."

The delay in treatment seldom creates a problem with cellulitis. "It's not typically life-threatening when first identified," Williams says. "It can potentially reach that point, but it's rare to arrive at the emergency room when it's at that stage."

The savings, however, are worth the wait. "That first patient incurred approximately a $3,200 charge that was covered 100 percent by insurance," Williams says. "And it saved the patient a multi-day hospital stay and thousands of dollars. The insurance company also saved money."

In the month after that first patient, Birmingham ID and Infusion has seen six more emergency-room referrals. "We saw our first one from Grandview in here this morning," Williams says.

Williams stresses that this outpatient option applies to more than emergency rooms. "Not everybody goes to the ER with this kind of condition," he says. "It's common for people to make an appointment to see their primary care doctor, who then refers them to the ER. Now they can refer them here."

The one-time IV option also benefits certain patients who may be adverse or in peril from a long-term intravenous line or peripherally inserted central catheter (PICC) line, such as drug addicts. "They can come here, and it eliminates the liability associated with discharging a known IV drug user with a PICC line. They get the one-time infusion here, and they're done," Williams says.

Even before the ER referrals, the infusion clinic, owned by three physicians, was performing 125 Orbactiv treatments, on average, per year. But Williams hopes this number will quickly rise considering that cellulitis ranks fifth in the nation for hospital admissions following an emergency department visit. And rise even faster once insurance companies and patients--who made $8,436,402 in payments to Alabama hospitals for cellulitis--realize the savings in both costs and time.