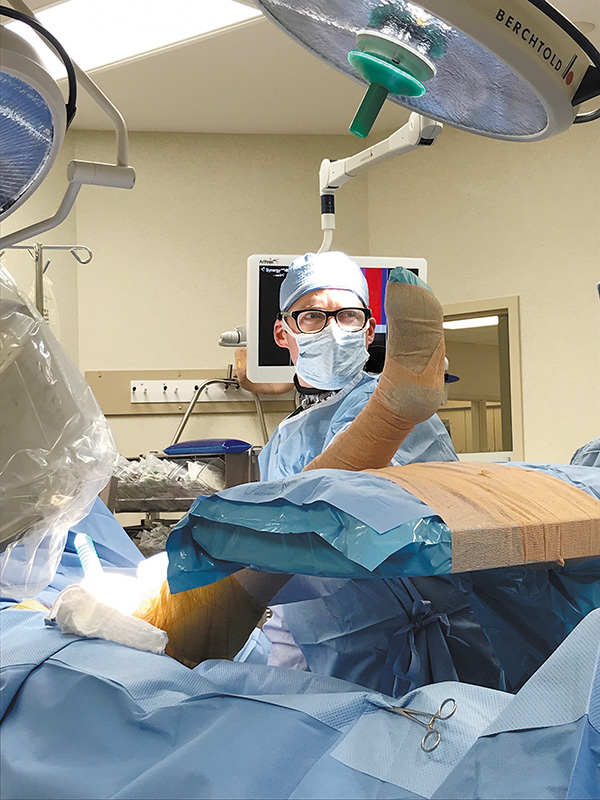 Abnormal development in the hip joint in adolescents and young adults is more common than was once thought. The condition can lead to hip dysplasia and hip impingement and usually requires surgery to correct the problem.

Michael K. Ryan, MD, an orthopaedic surgeon at The Hip Center at Andrews Sports Medicine in Birmingham, is one of only a few hip preservation surgeons who surgically treats these hip abnormalities with a surgical technique called periacetabular osteotomy (PAO).

"Hip dysplasia is a developmental abnormality of the hip socket that results in a shallow acetabulum, while a socket that is over covered, or too-deep, can cause impingement," Ryan says. "Both bony abnormalities change the load-bearing mechanics of the hip joint, leading to damage of the cartilage and labrum in the hip, which can eventually lead to arthritis at an early age."

In a healthy hip joint, the ball, or femoral head, should be perfectly round and the acetabulum, or hip socket, should be perfectly concentric so they match up well. In individuals with hip dysplasia, the acetabulum doesn't develop fully, which makes it too shallow to contain and support the femoral head. The abnormality causes misalignment in the hip joint and can cause the labrum to bear the force normally distributed throughout the hip. Injury to the labrum and ligaments can increase pain and damage or weaken the cartilage.

"That's where the hip preservation surgery we perform comes into play," Ryan says. "We evaluate young patients who develop hip pain with a goal of not only treating their pain but also delaying long-term problems related to arthritis."

Hip dysplasia can be caused by various factors, including family history, certain restrictive swaddling practices, and breech birth. "Pediatricians examine all newborns, but it can difficult to diagnose subtle dysplasia at that time unless there a palpable subluxation or a frank dislocation," Ryan says. "Additionally, routine hip ultrasound screenings are not performed on newborns in the United States unless there is concern for dysplasia.

"In addition to the genetic component of these conditions and how the socket is formed, a general theory is that these issues also can occur in children who play a lot of sports. With constant side-to-side movement required in many sports, we are seeing the development of hip impingement as these young athletes age. It isn't 100 percent proven at this point, but it is one of the theories."

The PAO is the main surgery used to correct acetabular dysplasia in adolescents and adults with fused growth plates. The three- to four-hour procedure corrects the bony deformity to relieve symptoms and normalize the load across the joint by re-orienting the hip socket in a more optimal and normal position.

"We cut the bone around the acetabulum and reposition the hip socket," Ryan says. "To do this, we expose the hip joint from the front of the hip by making a bikini-line incision which allows us to access the main bony struts that hold the hip socket in place. We use special tools to cut the struts, freeing the hip socket from the rest of the pelvis, but keeping the joint intact.

"That allows us to rotate the acetabulum into the correct position, which is then held in place with metal screws. Rotating the acetabulum allows us to put it in a more optimal position for load-bearing. The force of the body is distributed more evenly across the joint which protects the cartilage from early wear."

As with any surgical procedure, there are some risks involved. "The biggest initial surgical risk with PAO is bleeding, because we are cutting bone, and a tourniquet cannot be used during the surgery," Ryan says. "There is a small possibility of infection and blood clots like we see in knee and hip replacements. Most of these risks are relatively low, because most of the patients are young, have few medical co-morbidities, and are mobilized quickly due to the ability to bear partial weight on the hip immediately. There is also a small risk of non-union which means the bone doesn't heal where it was cut. In the long-term, the risk of developing arthritis persists, but a successful PAO performed in patients diagnosed early enough can delay arthritis for 10 to 30 years or more following surgery. That could be the difference between a hip replacement at 35 versus 55 or older."

Whether a total hip replacement will be needed later depends on many variables including the degree of damage present in the joint when the PAO surgery was performed. However, periacetabular osteotomy has been successful in relieving pain and delaying the need for an artificial hip joint.

"Right now, the PAO is the gold standard for treatment of adult hip dysplasia, because correcting the mechanical deformity has been proven to positively alter the long-term health of the hip joint," Ryan says. "Treating only the cartilage and labrum using hip arthroscopy cannot adequately correct the bony deformity, but recent advances have allowed us to combine hip arthroscopy and the PAO to treat all facets of hip dysplasia."