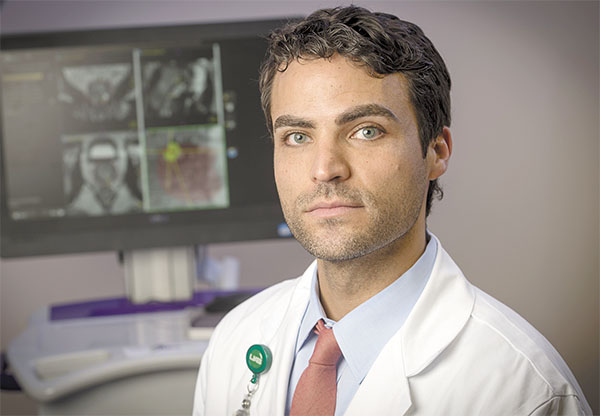 "If this was a prostate cancer tool, 90 percent of surgeons would be using it," says Jeffrey Nix, MD, assistant professor in the UAB Department of Urology, about blue light cystoscopy in bladder cancer surgeries.

The optical imaging agent known as Cysview, or hexaminolevulinate hydrochloride, has been approved by the FDA for the detection of non-muscle invasive cancer of the bladder since 2010. UAB began using it in 2014 and still remains the only facility offering it in Alabama.

The process is simple. About an hour before the cystoscopy, the imaging agent is delivered into the bladder and gets absorbed by the cancerous tissue. Using the special photodynamic diagnostics (PDD) system, the doctor inserts a long, thin tube into the bladder that emits both normal white light and a blue light. Under the blue light, the dosed malignant cells fluoresce.

"You see that fluorescence like a neon light from a restaurant sign," Nix says. It can reveal smaller satellite tumors associated with the more obvious larger tumors along with tumors that are atypical in appearance. "And you see the edge of distinction between normal and malignant tissue with incredible precision."

Clearly identifying the boundary makes PDD even more valuable to novice urologists. "It's easy for nurses to learn and easy to implement. You basically just push a button," Nix says. He shows the family the images from the blue light illumination because this can often make the tumor easily visible and understandable to them.

The process does not get used in every surgery. "However, in the majority of cases of non-muscle invasive bladder cancer, we use this enhanced technique. It is imperative to treatment that all of the tumors are removed," Nix says. Missed tumors during surgery is one of the proposed theories for the high rate -- 50 to 80 percent-- of bladder recurrence, making it the highest recurrence rate of any form of cancer.

That rate drops by 15 to 20 percent when the blue light is employed and time to recurrence also lengthens significantly. "The expense of bladder cancer is because the recurrence is so high and you have to follow up with patients forever," Nix says. "But if you spend a little extra money to do blue light to decrease that recurrence rate, then you save a lot more money by doing fewer future procedures."

Nix uses the PDD in about 90 percent of his patients. "I haven't heard a single patient complain about the extra charge," he says. CMS and private insurers have not covered Cysview as a separate fee initially, but only as part of an outpatient bundled payment which does not fully cover its cost. "We know it's beneficial, but insurers are almost always slow to move the needle. The hospitals had to eat part of that cost initially."

Things may change in 2018. Photocure, the makers of Cysview, met with Medicare officials this year. Though CMS purportedly said they will not pay separately for Cysview, the administration proposed new add-on billing codes that ultimately could pay more for procedures that use the fluorescing agent.

Despite the benefits of the blue light cystoscopy, few urologists utilize it. "I don't think it's because of a misunderstanding about it," Nix says. "It is simple to use and valuable for the patients." The problem appears to be awareness.

Bladder cancer ranks as the fourth most common cancer in men, who are about three to four times more likely to contract it during their lifetime than women, according to the American Cancer Society. Around 79,030 new cases and about 16,870 deaths from bladder cancer are estimated for this year. But the average age at the time of diagnosis is 73.

"75 and 80-year-olds, in my experience, tend to question their doctors a little less, unlike younger patients who are more apt to research their conditions and treatment options" Nix says. "Very few of my patients say they came to me for the blue light tech. They don't know it's something they want.

"If this was breast cancer, every surgeon would use it. We need to raise awareness of blue light cystoscopy among primary care physicians and patients in order for to increase utilization. If patients start to push for it, they will get it."