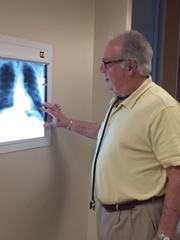 Allan Goldstein, MD studies an x-ray of a COPD patient.

Cigarette smoking is the leading cause of preventable disease in the United States and accounts for one in every five deaths each year, according to the Centers for Disease Control and Prevention (CDC). Smokers are at risk for breathing problems, heart disease, as well as lung and other cancers.

“More than 500,000 deaths each year in the U.S. are attributed to cigarette smoking. If you compare smoking-related deaths to the combination of deaths from AIDS, alcohol, vehicle accidents and firearms, those four together total only about a third of those deaths. The rest are related to smoking,” says Allan Goldstein, MD, a pulmonologist recently retired from Pulmonary Associates of the Southeast in Birmingham.

“Data shows that about half of all smokers die prematurely from a smoking-related disease,” he says. “We know there are about 4,000 chemicals in cigarette smoke and tobacco, many of which are carcinogens. Nicotine is one that has a negative effect on the heart and blood vessels. Also, there are about 7,000 chemicals in the tars, and 60 are known to be carcinogens, so whether someone is chewing, dipping or smoking, they are getting exposed to carcinogens that most likely will cause health problems at some point.”

Studies have shown that when people stop smoking, they see an immediate improvement in overall health. High blood pressure and the odds of getting heart disease drop, and the chances of getting emphysema, lung cancer and many other cancers also decrease. To help smokers stop, Goldstein and others from local hospitals, clinics, and the health department are working to develop a cessation program that can be used by individuals or businesses.

“We want to help people stop smoking in a healthy way. Some people can quit cold turkey, but that usually doesn’t work for most people,” Goldstein says. “Some try electronic cigarettes to help break the habit, but we now know these devices have carcinogens as well. Evidence also shows that the e-cig just leads to smoking down the road. It’s like anything else, if you substitute one habit for another, usually you don’t solve it.”

Counseling, along with appropriate medications, has proven to be the most successful way to quit, especially for people with a long history of smoking. “It’s difficult for physicians to provide the appropriate counseling in a 15-minute visit a couple of times a year, but they still should counsel these patients on quitting. For those who want to quit, the physician should refer them to someone who can help. The successful programs meet for six consecutive weeks for about an hour, with follow-ups at three, six and 12 months. The sessions can be for an individual or in a group setting,” Goldstein says. “We have to treat smoking as an illness – which it is – and we need to stop making it out to be ‘just somebody’s habit.’”

In addition to the cost to human lives and health, the CDC says that the total economic cost of smoking is more than $300 billion each year, and almost $170 billion of that is spent on direct medical care for adults. Almost $156 billion in costs results from lost productivity from premature death and exposure to secondhand smoke. Stopping this deadly habit is going to require a partnership between the medical, business, and health insurance communities, Goldstein says.

“We need to work together to make smoking cessation programs affordable and available to those who need them. We are trying to get people to stop a dangerous habit, and the insurers need to recognize that and pay a reasonable fee for the use of these programs. Smokers shouldn’t have to pay an unreasonable price for help just because they are smokers,” he says. “Industry is very concerned about the cost of health care and rightly so, especially the self-insured companies. They need to look at what they are spending on employees with cancer, COPD, heart disease and other smoking-related health issues. The cost of treating these things is huge, but nobody seems to want to spend that kind of money on counseling to prevent people from smoking. We want to partner with these companies so we can bring these cessation programs into the workplace.”

Goldstein also points out that it is imperative that we make it a priority to educate teenagers so we can prevent them from ever starting to smoke. “Statistically, if you smoke, you will have a health problem of some kind. In 50 years, I have yet to have one patient that has ever had better health because of smoking,” he says. “We need to prevent teenagers from starting, and that means we need to spend time in the schools. We need physicians, nurses, and people who are trained in tobacco treatment to give them basic information. Teachers also can provide information in health classes.

“We are not going to prevent death by having people not smoke, but we want to prevent all the deaths in people that do result from smoking. You can modify behavior by not starting cigarettes or at least by quitting. Everybody is going to die, but you might as well have a good quality of life for as long as you can.”

Perchance to Dream
The Literary Examiner