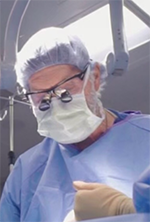 A new minimally invasive treatment for wrist replacement offers pain relief and the restoration of function. The Anika WristMotion® Total Wrist Arthroplasty (TWA) system is a major advance in total wrist arthroplasty intended to provide a stable, bone-sparing option for the treatment of wrist pain and arthritis. The procedure is also intended to alleviate pain and restore function, mobility, and rotational freedom of an arthritic wrist joint.

The WristMotion TWA system was cleared by the Federal Drug Administration (FDA) in October 2020 with limited launch of the product beginning on July 1, 2021. The modular joint preservation system replaces both the radial and carpal sides of the wrist joint for patients suffering from rheumatoid arthritis, osteoarthritis or post-traumatic arthritis. The system was designed to reduce pain while providing patients with a greater range of motion that is closer to the wrist's normal rotational axis.

Orthopedic surgeon Joseph M. Sherrill, MD, a hand specialist in Vestavia Hills, Alabama, has been using the WristMotion hemiarthroplasty implant for his patients since 2015. He has had no failures during the 32 cases he performed. Due to his successful experience with the system, Sherrill became interested in Anika's new Total Wrist Arthroplasty system and was the first surgeon in Alabama to use the system during its launch.

"When arthritis is localized in the wrist, you can perform a hemiarthroplasty. You replace only the capitate which is the key component to restoring the wrist," he says. "It is similar to hemiarthroplasty surgeries in the hip that have been done for years. Generally, the results are good, but patients can still have issues with pain and progression of arthritis on the radial side of the joint. These problems led me to focus on Anika's Total Wrist Arthroplasty System."

Prior to the traditional Total Wrist Systems, titanium screws were used to finish shoulder repairs. That led to the development of a wrist procedure - the proximal row carpectomy (PRC) - where the arthritic wrist bones are removed. The WristMotion Hemiarthroplasty system is performed in conjunction with a PRC, which leaves the capitate in place. The WristMotion Hemiarthroplasty implant then replaces the diseased area of the capitate. "With the WristMotion Total Wrist Arthroplasty system, patients who present with arthritis on both sides of the joint now have an innovative, stable solution that addresses concerns related to loosening and maintaining the center of rotation," says Sherrill.

"I had an active 60-year-old patient who enjoyed tennis, golf, backpacking, etc. He determined that he could develop a more stable situation with the WristMotion hemiarthroplasty instead of the Total Wrist implant. Another patient with advanced arthritis benefitted from the WristMotion Total Wrist implant," Sherrill says. "The Anika WristMotion Systems allow for intraoperative flexibility and is a much smaller operation than traditional systems on the market. It can provide pain relief and a quicker recovery for patients. Also, the screw design used in the capitate construct of both the hemi and total systems, has never shown any loosening. As a result, I believe we have a product that we can count on for almost 100 percent success."

Sherrill says the design focuses on the stability of the implant, which can result in a more stable joint overall. The height is adjusted on the radial side instead of the carpal side. "Basically, the system allows adjustment of the wrist height and stability of the implant curve on the radial side. It allows rotation for the wrist to bend into what is called a dart thrower's motion," he says. "It goes up toward the thumb and down to the little finger and closely reproduces the native anatomic motion of the wrist. It is the most functional activity we use with wrist motion."

Sherrill says surgeons should expect straightforward surgeries and good outcomes with the Anika WristMotion systems. "The reamer-based system tells us exactly where the implants will be placed," he says. "There are also multiple sizes of instrumentation and implants that can be used during the procedure to ensure a proper implant fit of a patient's wrist joint."

Sherrill predicts that the Anika implants will be a step above current systems. "With the instrumentation of this new procedure, we will be able to see where we need to use saws to cut bones and where to increase joint height on the distal radius instead of the carpal side. The system will provide multiple sizes of well-designed and easy-to-use instrumentation," he says. "In terms of patients, you want a predictable surgical procedure with a good outcome. The Anika instrumentation and implant system will facilitate that."