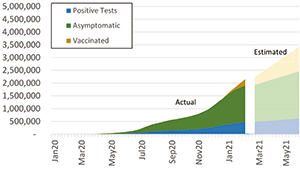 We believe that we are getting closer to herd immunity thanks to the vaccine, along with new scientific data which shows that more people got covid than were tested. We've learned from studies at Columbia, John Hopkins, and here at UAB, that there could be as many as ten people who had COVID-19 but didn't have a positive test for every one person who tested positive, which means that there may be many more people with antibodies that we originally believed.

The more people there are who have immunity, the less the virus will spread and the safer it will be for us to interact with one another. There is no magical number that signifies herd immunity. Each virus is different. They mutate at regular intervals so the number needed for herd immunity can move, but at the moment public health experts believe that once about 72 percent of the population is immune, we'll reach herd immunity. Current estimates are that we'll reach 72 percent sometime in late spring or early summer in Alabama, but this depends on many factors, including the rate of vaccination, and the number people actually have antibodies or immunity who didn't have a positive test. And it depends on whether or not the virus mutates in the next few months.

So we're excited to know that we might reach herd immunity somewhere between May and June.

Why is the number of people who had the disease but never tested positive so high at ten to one?

Early on in the pandemic, there was not much access to testing, particularly in places like New York city that were hit very hard in March. So it's not surprising to see numbers like that there. We've done similar tests at UAB, looking at people's blood for antibodies, and we see more like five to one in our area.

How will the virus variants impact the estimates of when we reach herd immunity?

So we have to watch the variants carefully. That said, it's something we do all the time with flu. The CDC has a Flu Vaccine Effectiveness Network (Flu-Net) that runs continual surveys to keep track of the various flu strains that are circulating to make sure the current flu vaccine is effective. They have now started Covid-Net that is collecting data on Covid cases around the country in order to stay aware of variants. And again, a mutation does not necessarily mean that the vaccine we have won't work.

How much of your herd immunity timeline is predicated on new vaccines like Johnson & Johnson coming to the public and how much is based on information on the supply in Alabama?

This is a conservative estimate. It assumes a very low level of vaccines. The May deadline assumes roughly 50,000 doses will be administered each week, which is probably lower that what we're doing in Alabama right now. It also assumes a three to one ratio of people who had Covid and never tested versus those who tested positive, while our studies look closer to five to one.

So if we scale up and vaccines come online faster, we could reach herd immunity a little sooner.

How many people do you estimate in Alabama have had the virus but never tested positive?

My guess, based on the data we see, is that we've seen about 500,000 total positive tests so you're looking at maybe 1.5 million who have possibly had covid and therefore have the antibodies, even though they've never tested positive. Some of them might have never even had symptoms.

What would herd immunity mean for large gatherings?

True herd immunity would allow us to start getting back together again. It would mean that we could have concerts and sporting events.

In that regard, we'll monitor the weekly number of cases carefully. As long as it trends down and stays below about five to ten cases per 100,000 population and we have decent testing in the state, then we'll know that it's safe to get people back together.

Vaccinations also keep people out of the hospital if they do get SARS-CoV-2 infection. And at this time in Alabama, fewer people are winding up in the hospital after positive test for SARS-CoV-2. If that number keeps going down and we see fewer people hospitalized even when infected, then we can start moving around again too.