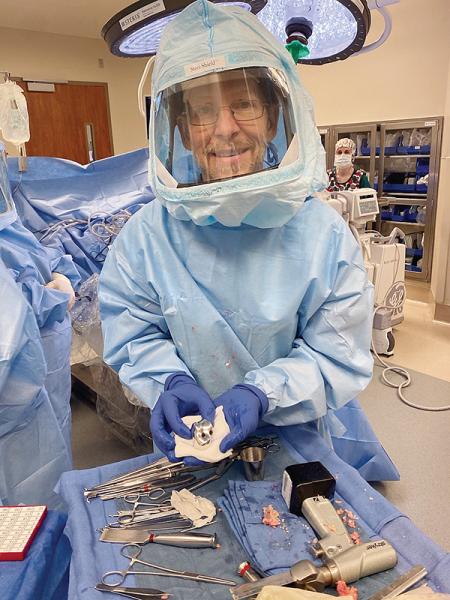 The term "joint replacement" generally invokes thoughts of hip or knee replacement, but thanks to new technology, total ankle replacement is now an option for patients with avascular necrosis (AVN).

Foot and ankle surgeon John Kirchner, MD, with Southlake Orthopaedics, is performing this surgery and said it can be life changing for patients.

Previously, patients with talar AVN had few surgical options. The most common treatment was fusion of the shinbone to the heel, which can be debilitating. "If you take away the talus, you affect the entire leg from mid-tibia down into the foot," Kirchner said. "It's an extremely rigid construct, and you take away the ability of the ankle to go up and down, and the foot's ability to go sideways to accommodate an uneven surface. It even becomes difficult to go up the slope of a handicapped ramp.

And while it is cost-prohibitive to create a metal talus for replacement, technology has improved to allow for 3-D printing in multiple media, including plastic and metals.

"Now that 3-D printing is mainline, you can take the talus from the opposite side, create a mirror image, and reproduce the bone for replacement," Kirchner said. "It gives us a reproduction of the missing bone and also allows us to have a mobile segment. That takes the stress off the knee and lower back."

Following CT scans of the affected ankle and the healthy ankle, three implants are printed to have on hand during surgery: one at size, and one each that are five percent larger and smaller, giving the surgeon flexibility if something unexpected is encountered during surgery. "Because the joints are custom-made, they fit perfectly," Kirchner said.

The surgery requires an overnight stay in the hospital, followed by three weeks of recovery with no weight-bearing tasks. At that point, patients are fitted with a boot and can begin to do a gentle range of motion and stand three or four times a day for up to a half-hour at a time. "That enables them to shower and wash dishes, fold clothes, and get up and feel more normal. At six weeks we put them in physical therapy to build up their strength and begin walking," Kirchner said.

As with any joint replacement, pain must be managed. "We often do the surgery under regional blocks, so patients are comfortable for the first night or two. That gets them over the initial inflammatory burst," he said. "Then they take pain medicine to stay ahead of the pain. Usually by about three or four weeks, they are using anti-inflammatories for daytime and narcotics at night for rest. The only other time there's really a burst of pain is when they start getting that soft tissue moving in physical therapy."

Kirchner said this surgery is not an option for people whose bones have already been fused. "That surgery requires that the leg be shortened significantly, and we can't get that length back," he said. "People who had open injuries with a bad infection are not good candidates. Those who had an open injury without infection are still possible candidates for this surgery."

Kirchner is one of only two surgeons in the state currently performing this surgery. He has completed two, with positive results. He expects that a few more orthopedists in the Birmingham/Huntsville/Mobile area will eventually train for the procedure.

"Total ankles are sort of finicky joints to begin with," he said. "If you don't have a large volume or a lot of experience, this is not something you are going to start performing. While total ankles are becoming more prevalent, total talus is just starting to be used. More surgeons are now being exposed to the possibility, and I would think we'll reach a point of doing more total talus surgery, even up to one or two a month."

Kirchner's two patients so far have been "incredibly satisfied" with the results, and he said the total replacement can be life changing, especially for younger patients who previously faced their future with a brace or limited mobility. "Imagine being 30 years old with an ankle injury," he said. "This surgery makes them more employable than the previous fusion. You can do construction, or jobs that require walking such as retail or delivery. It changes people's lives."