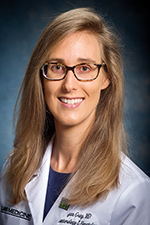 Finding and Stopping It

One in five of the 80 to 100 million Americans who have a fatty liver will develop NASH, Non-alcohol Steatohepatitis. What makes the disease particularly dangerous is its stealth nature. Labs for about half of patients with the disease show no warning that relentless inflammation and scarring are progressing toward cirrhosis--with the only chance for survival a transplant that may come too late.

"It can happen quickly and in younger patients who might not present until they are very ill. I have one patient with cirrhosis who is only 32 years old," Meagan Gray, MD, director of UAB's NASH clinic said.

As of now, there are no drugs FDA approved specifically for NASH. However, that could soon change with research now underway, including four clinical trials in Birmingham. Each of these candidate drugs works from a different mode of action. If approved, they may soon be used in different combinations to target the disease from multiple approaches simultaneously.

"UAB researchers have been conducting trials on two drugs and a third just launched," Gray said. "The first is a phase three clinical trial for Intercept Pharmaceuticals' Ocaliva." The obetaicolic acid targets receptors that affect bile acid levels. While research continues, the drug is now being reviewed for NASH by the FDA and it is expected to be approved soon.

"Our researchers are also working on a phase three trial of Genfit's Elafibranor," Gray said. "This is an oral medication that works as a dual agonist of PPAR-alpha and delta and has been fast tracked by the FDA.

"The new study we launched is for Eli Lilly's Tirzepatide. It's a phase 2B trial looking at the effects of the diabetes drug on NASH." The medication is a GIP and GLP-1 receptor agonist on biomarkers of NASH in patients with type 2 diabetes.

Given that it will be a while before new medications are approved and widely available, what can NASH patients do now to slow progression and improve their health? That's what Gray's NASH clinic was designed to help.

"The two primary culprits in NASH progression are sugary carbohydrates and saturated fats," Gray said. "Highly processed foods, our fast food culture and food insecurity that makes access to healthy food difficult are all part of the problem. If we can help patients lose 10 percent of their body weight, it should clear enough fat from the liver to stop and possibly reverse some of the scarring.

"That's why, when the NASH clinic opened last year, we located it at UAB Highlands so our patients would have access to the resources of the UAB Weight Loss Medicine. Dieticians work with patients to develop food plans and show them how to use healthy ingredients in satisfying meals. We support them in making healthy lifestyle changes. In addition to being in the care of a liver specialist, if they need to be seen by an endocrinologist or be evaluated for bariatric surgery or deal with other health issues, all the resources are right there. If patients are interested in participating in clinical trials, they can talk with our research coordinator to discuss which studies might be the best fit."

The key to helping NASH patients before scarring progresses to cirrhosis begins with early identification. "Those who tend to be most at risk are people with a BMI of 30 or more, those who have type 2 diabetes, metabolic syndrome, insulin resistance or high triglycerides or cholesterol." Gray said. "Ultrasound elastography and liver biopsy can confirm, but for the 50 percent of people with NASH whose labs don't show elevated levels, it can be difficult to get insurance coverage for testing."

One of the benefits to volunteers in clinical trials is that testing is usually included at no charge. "When I went in for my diabetes checkup, my doctor asked whether I'd be interested in volunteering for a trial," Michael, an Icosabutate volunteer, said. "I wasn't expecting them to find anything, but I had a fatty liver. The imaging and liver biopsy confirmed NASH. Whether I'm getting the placebo or the medication, at least now I know that I have it and so does my doctor. I hope by volunteering I can help other people and that there will be good medications for all of us soon."