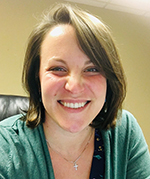 "In an effort to lower our number of premature births, we are looking for ways to mitigate the social impact of issues like structural racism," says Britta Cedergren, MPH, MPA, the Alabama March of Dimes Director for Maternal Child Health and Government Affairs. "Poverty can also contribute to stress and increase the incidence of premature births."

The Alabama March of Dimes program is engaged in advocacy work with several issues related to childbirth, such as improving workplace accommodations for pregnant women, addressing the treatment of pregnant women in prison, and assuring access to care.

"This year, we want to make sure that the state appropriately funds the Maternal Mortality Review Committee," Cedergren says. "The purpose of the committee is to determine the major contributing factors to maternal mortality by reviewing the case of every woman who dies within a year of pregnancy. Right now, we don't have an accurate count of these deaths or a way to determine the primary causes of death. We know that the health of a mother is vital to the health of a pregnancy, and we can't improve outcomes for one without improving them for the other. We are trying to determine the biological factors that are causing these mothers to die. Is it hypertension or drug abuse? What are the bigger societal issues?"

Cedergren represents the March of Dimes on the Alabama Perinatal Quality Collaborative, a group of health care representatives who are working to address the causes of pre-term birth rates and the high number of mother and child mortalities.

Sara Mazzoni, MD, MPH, Associate Professor of Obstetrics and Gynecology at UAB, is the OB/GYN lead for the Perinatal Quality Collaborative. She was not surprised at Alabama's failing report card. "In Alabama, access to medical care is a big problem," Mazzoni says. "We haven't expanded Medicaid, and we have a huge number of women who are uninsured. These women don't have access to contraception, which can help delay pregnancy until the woman is ready. And they aren't able to access medical care to optimize health conditions such as diabetes and high blood pressure before becoming pregnant. So many women are entering pregnancy sooner than they might want and they are unhealthy. That presents a host of problems that usually lead to pre-term birth."

"We need to provide these women access to health care. Medicaid expansion is the easiest, but no one wants to talk about that in Alabama because it has become a political issue instead of a health care issue. As long as we continue to value our politics more than we value our women and children, we will continue to fight about it.

"Women need access to contraception. The Alabama Department of Public Health is doing a fabulous job in this area. They have expanded their family planning efforts, and Jefferson County is working hard on the issue too. If the state won't expand Medicaid, these women need access to health care via health insurance somehow."

Donald Williamson, MD, president of the Alabama Hospital Association, is also a proponent of expanding Medicaid. "States that have expanded Medicaid have seen a statistically significant decline in infant mortality compared to the non-expansion states," Williamson says. "For women who are currently in that inter-pregnancy gap without coverage, Medicaid would provide them with access to regular care to control their blood pressure and diabetes, and provide earlier diagnosis for these and other serious conditions. Expanding Medicaid is the foundational change we need in order to improve our bad outcomes.

"And although there are up-front costs with Medicaid expansion, the taxes generated down the road from the two billion dollars of the new federal revenue and the state savings that will occur will provide significant revenue to offset those costs.

"And we've never factored in the economic benefit of a healthy workforce. If we can provide care that helps to prevent delivering pre-term, underweight babies, then in the long run, we will have a much healthier work force."

The stakeholders of the Alabama Perinatal Collaborative are working together to address these problems. Sitting on the collaborative are members of the Alabama Hospital Association, Alabama Medicaid Agency, Alabama Department of Public Health, March of Dimes, and Blue Cross and Blue Shield along with neonatologists, general pediatricians and obstetricians. The group chooses quality initiative projects and works together to address state challenges.

The Collaborative just completed a birth certificate data project and is launching a Maternal Hypertension project and a Neonatal Opioid Withdrawal Syndrome project. "Working on these programs has brought stakeholders together and has opened communication between all the players in the state," Mazzoni says.

The people involved in the initiative are excited to donate their time because they want to provide these women and children a chance for good medical care. "The United States is the only country in the world besides Sudan and Afghanistan where maternal mortality is rising," Mazzoni says. "That's embarrassing, and it's time we consider how we value women and children and how we're going to solve this problem. If we aren't going to give women access to health care and give them the best opportunity to thrive before, during and after pregnancy, then we will continue to get an "F" and continue to watch women die in childbirth."