Urologists Can Serve as Advocates for Men's Health 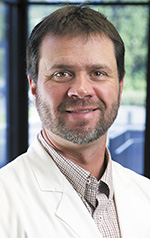 Gynecologists have long been recognized as champions of women's health care, and Eric Brewer MD, a physician with Urology Centers of Alabama, says urologists should play the same role for men.

"Historically, men have not been as good as women about regular health maintenance," he said. "Urologists tend to have a special relationship with men because, while we treat the whole urological system, we also the male genital system. They maybe wouldn't talk to their primary care physician about erectile dysfunction, but they would come to us about it.

"Men are now more comfortable talking about erectile function than ever before. Statistics show 40 percent of men in their 40s are experiencing some degree of erectile dysfunction, and the percentages go up as we age, so it's a prevalent condition. It doesn't have to be embarrassing, and there are treatment options and ways we can manage it. It does affect men's psyche and can lead to depression if they feel that it damages their self-image. Sometimes primary care physicians are comfortable starting patients on medicines on their own, and many times they will refer patients to us. It's important that referring physicians know we treat the full spectrum of erectile dysfunction."

Many men go to a general practitioner for a prostate exam and PSA test, but others may go directly to a urologist. Either way, Brewer is adamant that the prostate exam is necessary, even if the PSA levels are normal. "We strongly believe that prostate cancer screening is important, and not just the PSA blood test but also the annual rectal exam," he said. "Statistically we still diagnose about 15 to 20 percent of cancers every year despite a normal PSA blood test. Many primary care physicians have gotten away from doing rectal exams, but we are still big proponents of it. No one likes to get prostate cancer screening, but it's something you need to do."

Another issue affecting men's health is low testosterone levels. "We know that as men age, their testosterone production declines. That can create symptoms such as low libido, fatigue, even some depression and loss of muscle mass," Brewer said. "Our practice has seen an increase in referrals for low testosterone. Testosterone replacement therapy got a bad rap in the media for increasing the risk of cardiovascular events, but there have been numerous studies that show it doesn't necessarily increase that risk. In fact, having a testosterone level within normal range can actually be protective of cardiovascular events and overall health."

Brewer doesn't recommend testing testosterone levels as a regular screening test, however. Patients who present with low levels and no symptoms don't need treatment. "We don't have to raise their testosterone just because the number is low," he said. "But if we see specific symptoms we are trying to treat, it might make sense to put a patient on testosterone replacement therapy."

Brewer wants patients, particularly young men from puberty to age 40, to perform testicular self-exams, much as women are counseled to examine their breasts monthly. "Even though testicular cancer is not as common as some other cancers, it is still a risk," he said. "If they do an exam every month, as they feel something abnormal, they can come to us to have it checked out.

"It's important for us physicians to remind our male patients of the importance of exercise, eating well, reducing stress, drinking water and ceasing smoking. While those guidelines are important for patients of all genders, men sometimes need extra reminders. They aren't always the best at taking care of themselves. We need to remind them that diet and exercise are important. Good sleep and reducing stress can affect any organ system in your body."

Urology Centers of Alabama has made a conscious decision to be advocates for men's health, and they encourage urologists and other practitioners to do the same. "Our practice has made an effort to focus on this the past several years," said Brewer. "I don't necessarily think it is a part of urology training, but we feel it's very important. I hope other urologists will pick up that baton and also be advocates for overall men's health. We try to not just focus on the urinary system, but on the man as a whole."