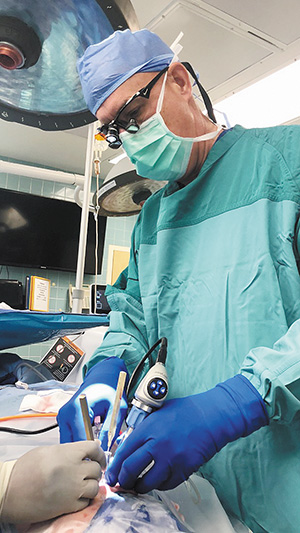 The Le Fort I osteotomy procedure for maxillofacial corrections of jaw deformities has been used successfully for more than 40 years. A recent enhancement to that procedure using Stryker Corporation's new Facial iD Orthognathic Plating System now makes it possible to virtually plan a patient's facial reconstruction and fabricate three-dimensional printed rigid fixation plates prior to surgery.

"We have been using virtual surgical planning (VSP) for more than five years, but this new technology takes VSP to a new level," Kahn says. "We are able to fabricate and design a three-dimensional printed titanium plate that shows the precise position of the patient's bone structures and rigid fixation hardware prior to surgery.

"Each plate is patient-specific, designed and targeted for individual patients. Stryker does not design or print multiple plates to be used on other patients. There are other technologies similar to this one, but Stryker's Facial iD system was the first."

In the past, surgeons would use a three-dimensional CT scan to plan a procedure. "We would use VSP to plan surgeries with the input of an engineer. We would virtually plan how and where to make cuts in the jaw, then move and position the jaw in order to achieve a desired occlusion or bite," Kahn says. "However, we didn't always know how the skeleton was going to move, where there were areas of thick or thin bone, where the screws needed to be placed, or if there were areas of potential interference with critical structures within the facial bones."

With the development of the Facial iD Orthognathic Plating System, Kahn says they can see the patient's three-dimensional skeleton prior to surgery, and they can virtually cut the jaw to determine how they will put the pieces back together. "This new technology gives us bone-density maps that help surgeons predict areas of thin bone, potential bone that might fracture, interferences with certain aspects of the bone, and the appropriate placement of screws," he says. "Before we ever operate on the patient, virtual planning and Facial iD provide us a roadmap. We have never had this before, and it is truly cutting-edge technology."

Kahn says he has practiced maxillofacial procedures for more than 31 years and never imagined that he and his partners, Michael S. Koslin, DMD, and Douglas A. Denson, DMD, MD, would be using this type of technology. "We are looking at a patient's skeleton in three dimensions. We are cutting the jaw during a virtual Le Fort I osteotomy, moving the jaw, and determining how we will put the pieces back together," he says, "In our first Facial iD procedure, we were prepared to revert to the old-fashioned method of rigid fixation. We were pleasantly surprised when we saw the intraoperative correlation between VSP/Facial iD and the actual surgery. It showed that the intraoperative clinical picture perfectly matched the predicted position of the jaw and screw hole positions for the rigid fixation. Everybody in the operating room was amazed."

For the maxillofacial surgeons who don't perform these procedures often, the Facial iD Orthognathic Plating System will help them from a planning standpoint. "It highlights bone density and vital structures, and it determines where screws should be placed," Kahn says. "With better planning, it will decrease anesthesia time, bleeding, and swelling. Avoiding such complications helps patient recovery."

For Kahn and Koslin, the Facial iD Orthognathic program will be a great tool for their practice.

"Three-dimensional printed plates will have applications for many types of orthognathic surgery, including many different midfacial, mandibular, trauma and other facial bony reconstructions," Kahn says. "But there are other cases we are looking at in our practice where we can use this technology to plan more precisely, to have better outcomes, and to be more effective surgeons."