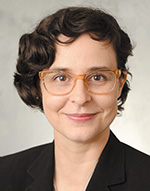 Children's of Alabama pediatric neurologist Lydia Marcus, MD wants the medical community to take acute flaccid myelitis (AFM) seriously. She has dedicated her career to studying the mysterious disease, after all, but she also wants physicians and parents to recognize that it is quite rare. "We've seen 500 cases in the entire U.S. in five years," she said. "We don't know why some kids get just a cold and others develop AFM, but I don't want people to panic."

AFM was identified by the CDC in 2014, although in retrospect it's clear there were some cases in 2012 and even before. "Kids develop a relatively acute onset of extremity paralysis," Marcus said. "Some may have swallowing, speech and breathing affected.

"We are still trying to determine what causes it. There seems to be an association between enterovirus infections and AFM. Enterovirus a very common virus, and it is during a time when this viris is prominent that we see AFM patients. The majority of AFM patients have had enterovirus isolated from their respiratory specimen or their stool. However, we have a hard time finding enterovirus in their central nervous systems. There is some debate about whether this is a correlation or causation, and if it is a causative agent, is there a direct infectious process, or is it a post-infectious response? We don't have the answer to that, and this is what a lot of the studies are now trying to identify."

AFM is often referred to as a polio-like disease, but Marcus said AFM is definitely not polio. "With polio you can have a respiratory infection and not the paralysis, but it is much more likely to have paralysis. And the type of paralysis is the same type as AFM, which is flaccid. But with enterovirus, you have a much higher chance of getting the virus and not having AFM," she said.

The disease typically affects young children, average age five, in the late summer or early fall. So far, it has followed an every-other-year schedule, with a higher incidence of cases in the even years and fewer in the odd years.

For now, treatment for the disease consists primarily of providing supportive therapy. "If the patient has trouble breathing or has trouble with his blood pressure, we take care of that and rule out other infections. We are treating them with immunotherapy in hopes it might have some effect," Marcus said. "We have been treating standardly with immunoglobulin and, depending on the case, we might treat with other modalities like plasmapheresis or IV steroids. But this is all without knowing whether these treatments are having an effect. If this is a post-infectious process, we could be helping, but we don't have an answer yet."

Some studies have looked at anti-viral treatments and fluoxetine, but they have not shown any effect to date, according to Marcus.

While the disease is concerning, most children do not die from it. "The prognosis is really variable," Marcus said. "It depends on how severely they were affected. Some people may have relatively mild or moderate unilateral limb weakness and others may become quadriplegic. A major determining factor is the amount of respiratory involvement. If the respiratory centers high in the spinal cord are involved, then kids are requiring chronic mechanical ventilation and have to go home on ventilators. Some children have lower brain stem involvement which can affect their ability to speak or swallow."

There is some variability in how much improvement a patient may experience with AFM. "Some centers report full recovery in some patients," Marcus said. "We haven't had anyone with a full recovery, but we've had people with significant recovery. Most of our kids see minimal to some recovery. Having early and aggressive physical therapy and rehab services is extremely important. Most recovery is seen in the first year."

David Kimberlin, MD, professor and co-director of the division of pediatric infectious diseases at Children's is primary investigator for an NIH 36-site study on AFM which will begin this fall, and Children's will be one of the sites. "We will try to discover the underlying cause, the best treatment, what affects outcome and what factors predispose certain patients to AFM," he said.

Marcus is also responsible for reporting AFM cases to the Centers for Disease Control through the Alabama Department of Public Health. Children's is not involved in any treatment trials.

Marcus cautions parents and medical personnel to be aware of AFM, but not to panic every time a child gets a cold. Parents should be coached in basic hygiene and preventative measures, however. "Parents should be using good hand hygiene, keeping their children home from school when they are sick, and using good infection practice. That's the best way we know to avoid AFM," she said.

Bottom line, there are still more questions than answers when it comes to AFM. "We don't know why one person gets enterovirus and has a cold and another person develops AFM. But we are working on it, and we may design a vaccine in the future, but we still have to figure out the enterovirus connection," Marcus said.