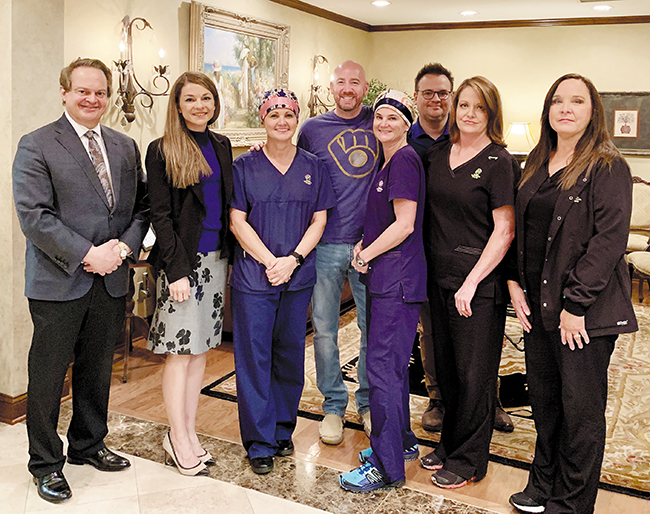 When military veteran Don Austin, who received trauma to his nose during Desert Storm, needed a revision of his septorhinoplasty surgery in order to breathe adequately, he contacted the American Academy of Facial Plastic and Reconstructive Surgery (AAFPRS) and their Faces of Honor Program. Because he was about to relocate from Kansas to Birmingham, he was referred to Daniel Rousso, MD of Rousso Facial Plastic Surgery Clinic and Aesthetic Medical Spa. Under the Faces of Honor Program, Rousso performed the surgery free of charge.

The program, started in 2009, offers pro bono medical and surgical expertise to veterans who received face, head, or neck injuries while serving our country.

"I've been involved in the AAFPRS for over 30 years," Rousso said. "We have a number of programs to help people. One helps victims of domestic violence and this one is for veterans. This is a way for us to give back to vets who have given up so much. The program has a lot of merit."

Austin's surgery is the first Rousso has done under this program, although he once, for another organization, repaired a scalp defect for a young boy whose father was killed in Iraq.

Austin's nose was injured in 1991 and then again in 2003. He originally had his nose rebuilt using a rib cartilage graft, but the cartilage had warped and shifted, causing a 60 percent obstruction which made breathing difficult.

"When he came to Dr. Rousso, in addition to the breathing obstruction, he had external dorsal deviation, a widen dorsum, a dorsal hump and a ptotic/asymmetric tip. He needed a revision rhinoplasty to help him breathe and feel better about himself, and to get him back to square one," Nancy Higginbotham, practice administrator, said.

Rousso removed the original graft and after reshaping it, put it back in to rebuild the bridge of the nose. He then rebuilt the tip of Austin's nose using cartilage from his septum, and straightened the septum as well.

"We use special stitches so we don't have to pack the nose for this surgery," Rousso said. "Typically, patients are feeling good and looking good, with little bruising, within a week. We get them back in the swing of things quickly."

The surgery was performed at the Rousso Facial Plastic Surgery Clinic. Rousso has his patients spend their first night at Embassy Suites with a sitter who provides cold compresses and changes the gauze bandages. A physician from the clinic comes by to check on his patients that evening as well.

Embassy Suites donated the room for the recovery, and many of the staff at Rousso's clinic donated their time. Rousso absorbed all other costs.

"The surgery was very successful," Rousso said. "At his one-week visit, the patient was tickled because he was breathing so much better."

Higginbotham said they hope more vets and facial plastic surgeons will learn about the program when they hear about this case. "Vets don't use this program very often, because they don't know it exists," she said. "We want to make other doctors aware of it so they can give back to those who need it."

The AAFPRS web site (www.aafprs.org/face-to-face/faces-of-honor/) offers details about the program: "We want to provide a 'thank you' to the brave men and women who have served our country. Some may have already received treatment in a military hospital while on active duty and may have been discharged. Others may have relocated to their home base and remain on active duty, being cared for by a DOD or VA medical facility. Some veterans may be from the National Guard or reserve, some may be geographically separated from a VA facility, and some may just want an additional caregiver consultation.

"Our volunteer surgeons are offering to help complement the care that these facilities provide, but we are not trying to compete with them. We want to help eligible veterans find a qualified surgeon with the best matched skills, and hopefully in a convenient location.

"If you are a military service member or veteran who was injured while serving our country and have facial, head or neck injuries sustained either in combat or non-combat/support activities, you may be eligible for these services."