The Cyclotron Arrives at UAB 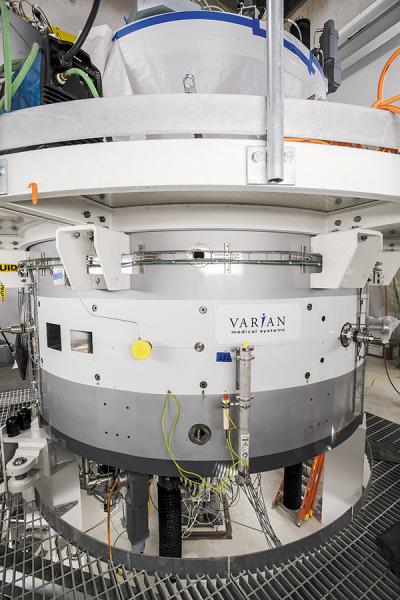 The weight equivalent of 13 African elephants, the 90-ton cyclotron for the UAB proton therapy initiative was lowered through the roof of the three-story facility in March and marks the beginning of the final stage before treatments can be offered next January.

This initiative will make Birmingham one of only 29 locations in the United States providing this type of radiation treatment for cancer. "The holy grail with proton therapy is that it spares normal tissue exposure to the maximum dose provided at the tumor site. And that minimizes the side effects to radiation," says James A. Bonner, MD, chair of the UAB Department of Radiation Oncology.

Under construction since January 2018, the UAB Proton Therapy Center--and the $25 million cyclotron--are owned by UAB's partner in this initiative, Proton International, which leases the land from UAB. The technology will be utilized and run exclusively by UAB medical staff, including radiation oncologists, other cancer physicians, medical physicists, dosimetrists, radiation therapy technologists and nurses. Planning and pre-treatment, however, will continue to be performed at UAB's Hazelrig-Salter Radiation Oncology Center.

"Proton therapy is already having a tremendous impact on the health of people around the world," says Chris Chandler, CEO of Proton International. "Experts estimate that about 250,000 cancer patients in the United States alone could benefit from proton therapy."

The superconducting cyclotron works by pulling protons, the building blocks of atoms, out of hydrogen molecules and then accelerating them to over 100,000 miles per second. The particles are then emitted through the head of the machine as a beam, just like standard x-ray radiation targets tumor sites in the body. The difference, though, is how protons behave.

That abrupt potency drop after hitting the cancer target makes proton therapy a game changer in some circumstances. "It's important for deep-seated tumors, such as in the brain," Bonner says. "And in pediatrics, where we want to spare the growing tissue, because radiation will stunt growth."

The therapy has its limitations, though. "In general, it's used on solid tumors," Bonner says, and possibly to treat leukemia when the white blood cells accumulate to form what appears to be a solid mass.

The appropriateness of using proton therapy to treat a cancer depends on whether that rise and fall in dosage plays a vital role in the treatment. "For some tumors, we want to treat all the way through the body, so we would not have a reason to capitalize on the characteristics of the proton Bragg peak," Bonner says.

But proton therapy may be ideal for a deep-seated sarcoma where surrounding tissue needs protecting, such as in the head, spine and neck areas, and in the lungs to protect surrounding lung and heart tissue.

Studies have yet to show that current proton therapy outperforms other radiation therapy regarding tumor kill. "However, the main advantage is the ability to tailor the radiation dose such that the maximum is deposited in the tumor and the surrounding normal structures are spared the high doses," Bonner says.

So for a patient with laryngeal cancer, proton therapy may be appropriate to protect the nearby lymph nodes in the neck. But if the nodes are also cancerous, then conventional radiation treatments will be just as effective since the surrounding area requires no special protection. And the patient avoids the higher cost of the proton therapy, which can run $18,000 to $100,000 more than other forms of radiotherapy.

From the patient's point-of-view, most of the process for proton therapy resembles traditional radiation therapy. "We have to spend more time for positioning and technologies for proton therapy," Bonner says. But the actual treatment takes roughly 30 minutes, depending on the case.

With the arrival of the cyclotron, all the major equipment is now in the facility. "It just needs to be assembled, and then we'll conduct several months of testing," Bonner says.

He is aware of many patients in the surrounding area who have sought proton therapy elsewhere, such as in Jacksonville, Florida, and at St. Jude Children's Research Hospital in Tennessee. They travel hundreds of miles for six weeks or more to gain access to this cancer treatment.

"This is terrific for the medical community," Bonner says about the Proton International at UAB facility. The initiative will also allow UAB to be involved in clinical research studies on the use of proton therapy, to discover the full utility of the therapy and produce best practice parameters on its use.