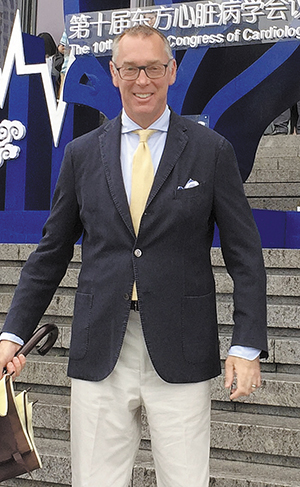 It began in 2008 with two Chinese cardiologists--a man and a woman. They were the first to participate in a cardiovascular fellowship program between Chinese physicians and Princeton Baptist Medical Center. They stayed six months and the program took off.

"This has been not only something outstanding in clinical experience for the Fellows, but for me personally. It's built wonderful friendships," says Farrell Mendelsohn, MD, an interventional cardiologist at Princeton and co-founder of the Chinese Cardiovascular Fellowship Program at Princeton.

This year, the 100th Chinese physician has completed the fellowship. "It was such a success in the beginning, that two more physicians wanted to come after that first one. There was so much interest throughout the country," Mendelsohn says. "We went from two cardiologists coming every six months to four to six cardiologists coming every three months now. We are close to having had a physician from every province in China."

The number of physicians teaching the fellows has also grown from two originally into a broad team of Princeton cardiologists, cardiovascular surgeons, vascular surgeons and other medical experts.

Just two years into the program, the Chinese health ministry officially endorsed it and named Mendelsohn as an advisor to the ministry for training. Then a few years later, in 2014, the director of the Chinese Ministry of Health, Chen Ran, personally visited Princeton. "It was incredibly exciting to have her here," says Mendelsohn, because Ran served as the top healthcare official in the country.

As the program grew, the involvement by the Chinese government took another positive leap. Hospital presidents had started nominating physicians to participate. "We ended up getting an official director of the program in China," Mendelsohn says. "A man who is in the top two or three in the country. He's one of these people who is editor or associate editor of 15 to 20 medical publications internationally and setting national standards and guidelines."

As the head of the Heart Center at Peking University First Hospital in Beijing, Yong Huo's involvement added a new level of credibility to the Fellowship in China. "Having a leader like that involved in the process only enhances the program," Mendelsohn says. For the Fellows, Huo's signature on the certificates of completion "means a lot for their advancement in China."

Besides viewing regular cardiac procedures, the Fellows have been exposed to cutting-edge research procedures. They witnessed the first stem cell transplants into the heart in Alabama and the first in the world gene therapy protocols. "They got to see some really novel tech," Mendelsohn says.

Now the curriculum also includes exposure to structural heart disease. "It's a whole new field that's so new to them and they really enjoy that," Mendelsohn says.

He says that what the Fellows have found most surprising during their training is the surgical options available for cardiac patients. "Many types of cardiac conditions that we would send to surgery, they are almost forced to fix with interventional techniques, such as complex stenting procedures," Mendelsohn says.

Back in China, past Fellows have kept in touch over the past eight years through social media outlets, sharing knowledge. That recently spawned reunions of the Fellows, with Mendelsohn attending the latest this summer. "Now these physicians are leaders at their own hospitals or in cath labs," he says. Held every two years, the symposiums allow the cardiologists to present their interesting cases and share expertise.

"It's amazingly evolved over there since my first visit," Mendelsohn says. "Their resources have grown tremendously. They have, in some areas, more technology than we have. In other areas, they are a little behind." For instance, in structural heart disease, such as fixing valves with new devices, Mendelsohn witnessed some lagging. But in other tech, they surpass the U.S., such as the use of special balloons coated with medications.

Mendelsohn says the program allows the cardiologists to learn techniques and standards of excellence, and to have some of their own skill sets reinforced on an international stage. It also fosters ties between the medical communities of two countries during a time of escalating geopolitical unrest. "It's been to me not just a fabulous medical exchange program, but a fabulous cultural exchange program," Mendelsohn says.