New Breathing Tube for Cardiac Arrest Could Save Thousands 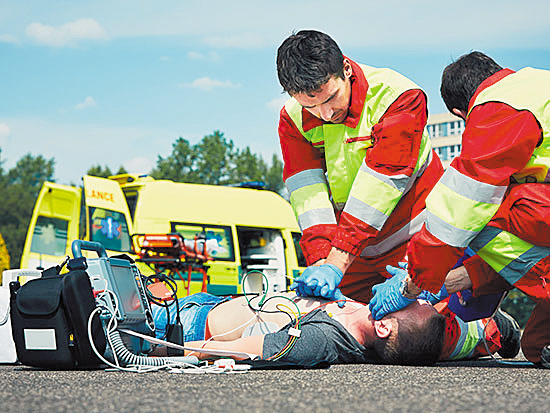 A study comparing two breathing tubes used by paramedics during out-of-hospital cardiac arrest shows that the King laryngeal tube was superior to the more commonly used endotracheal tube. Findings of the Pragmatic Airway Resuscitation Trial, led by investigators at the UAB Alabama Resuscitation Center and published in the Journal of the American Medical Association, show that the King LT was quicker and easier for EMS crews to insert than the traditional endotracheal tube, or ETI.

"Out-of-hospital cardiac arrest is a major public health problem in this country, with some 424,000 cases per year," said Shannon Stephens, EMTP, a researcher in the UAB Department of Emergency Medicine in the School of Medicine and the national project director for PART. "Only about 10 percent survive, and airway management during cardiac arrest is an extremely important aspect of treatment."

Paramedics often care for patients with cardiac arrest by inserting a plastic endotracheal tube into the lungs to assist with breathing. The King LT is a newer device. The study examined the performance of the two devices to see whether either produced higher 72-hour survival rates in adults with cardiac arrest treated by EMS responders.

"If all EMS systems across the country were to shift to King LT as the primary advanced airway for out-of-hospital cardiac arrest patients and experienced similar survival rates, more than 10,000 extra lives would be saved each year," Stephens said.

Both breathing tubes are approved by the FDA and are not considered investigational devices. The two devices had not previously been compared to each other to determine whether one works better than the other until now.

27 EMS agencies from five metropolitan areas in the United States participated in the PART study. A total of 3,004 subjects were enrolled, with 1,505 assigned to initial King LT and 1,499 assigned to initial ETI. Patient demographics and arrest characteristics were similar in both groups. Henry Wang, MD, formerly the vice chair for research in the UAB Department of Emergency Medicine and now in a similar role at the University of Texas Health Sciences Center, was the national primary investigator of the study.

The study was conducted in Birmingham, Dallas, Milwaukee, Pittsburgh and Portland. The Bessemer, Alabama, Fire Department was the first EMS agency in the country to take part