The Value of Community Health Workers 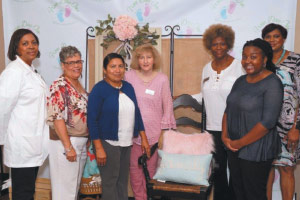 "We're different than anybody else," says Trinita Ashford, MPH, executive director of ConnectionHealth in Birmingham. "We're the only community-based organization in town that recruits, trains and employs community health workers."

The community health workers (CHW) at the nonprofit serve as messengers, supporters, and well trained resource guides for the area's most vulnerable populations in Jefferson County and into the Black Belt region of rural Alabama. "The ideal recruit comes out of the community," says Lynetta West, program manager. "They're a trusted member and they're familiar with that community."

Every recruit undergoes a lengthy training developed by ConnectionHealth in partnership with the UAB Diabetes Research Center and Department of Medicine, Division of Preventive Medicine. Based on a review of nationwide CHW certification and licensing programs, the 60-hour course includes lectures, self-study, simulations, and case studies. Once hired, the training advances into the field for another 20 hours of shadowing and in-service education.

The more than 170 CHWs who have gone through this course so far emerged with skills ranging from motivational interviewing to chronic disease management, conflict resolution, and client-centered counseling for behavioral change. "That's why institutions, like UAB, partner with us," Ashford says. "Because we can reach out and get information into the different communities."

During the height of the pandemic, ConnectionHealth partnered with MedsPLUS Consulting, which hosted vaccination clinics in areas with low vaccine rates. "We provided CHWs for canvassing neighborhoods, registering people, arranging their second vaccine, and waiting with people," West says, explaining how residents would more readily listen to the facts on the vaccine from the relatable CHW over the healthcare professionals.

ConnectionHealth also partnered with Birmingham school system for in-school vaccination clinics. "The parents had to sign onsite, so we had the whole family there and could vaccinate all the family members," West says. The same situation was in play at Baby-Palooza where pregnant mothers were accompanied by their extended families at times. Educated by the trained and trusted CHWs, entire families were vaccinated.

The CHWs also aim to teach people to advocate for themselves. That self-advocacy has been put into action in the nationally-recognized From Day One program created by the Jefferson County Department of Health. Through referrals from the county's health centers and obstetric complication clinics, a community health worker gets paired with the pregnant women. "Our program is different from most," West says. "This is not their first baby, and that sets us apart."

Additional children multiply the responsibilities on the expectant mother and complicates finding solutions. The CHW finds sources for anything from essentials and mental health counseling to childcare. "We're not only focusing on the baby, we focus on the mom," West says, by getting the mother thinking beyond the pregnancy. "When we leave, we want to make sure mom has set up a plan for moving on in life. Does she want a job? More education?" Her CHW partner then helps her map out the necessary steps.

That same pairing model is being used in a pilot program currently underway with UAB Hospital. The one-year effort pairs a CHW with an emergency room patient being discharged to increase post-discharge primary care visits, reduce 30-day hospital readmissions, coordinate social services for patients and provide ongoing support for self-management.

"We also train for other people," says Ashford. ConnectionHealth recently received a request from Prosper Birmingham, a workforce development program, to recruit and train 25 of their participants in community health worker skills. "They're also going to learn computer skills from another organization, then do a four-month internship, then hopefully be placed with a job," Ashford says.

Primarily, ConnectionHealth receives requests to deploy CHWs for programs from the healthcare community. Those requests are growing. Recently, Alabama Department of Public Health in Montgomery requested a proposal for more than 80 CHWs. "They have funded organizations that will have CHWs, and they want the same group to train all those CHWs," Ashford says.

In some states, CHWs can earn official certification and insurance covers certain services performed by them. Twenty years ago, Ashford says, it was quite different. "We called them lay health advisors, and they were all volunteers," she says. "Now they're called community health workers, and it's a career nationwide."