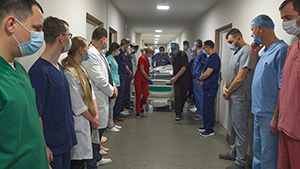 On February 24, Russia invaded Ukraine. Since then, as we all know, they have relentlessly bombed cities into rubble, they have raped women, and murdered thousands of innocent people. Many of us feel helpless in the face of this horror.

That's how Jan Skowronski, MD, interventional cardiologist with Cardiovascular Associates, felt until he realized there was something he could do--adapt the Fortuna Foundation he and Will Hightower, MD had set up to provide endovascular training to cardiologists around the globe so it could also channel donations of supplies to Ukrainian hospitals and refugee centers.

"I'm originally from Poland, and several of my family members were born in the area that is now in Ukraine," Skowronski said. "I've travelled there and know people in the area. I felt I had to do something. It might have been easier to give to one of the large international organizations and hope that some of it eventually reached Ukraine, but I knew the need was urgent, and I wanted every penny possible to go toward helping."

Skowronski got in touch with his contacts and tracked down Ivano-Frankivisk regional hospital. It was treating casualties coming in from the front and needed supplies for surgical care and rehabilitation. He also heard about Yazlovets Abbey in the southern part of the country, where nuns were trying to find food and supplies to care for more than 100 children, including orphans and kids with their mothers. With the help of the first few donations, he went shopping online.

"We found some sources in Ukraine that were still shipping, so we were able to deliver most of the supplies quickly," he said. "The hard part was finding gasoline. Most had been bought by people trying to flee or for use in military vehicles. We eventually found enough for emergencies if we have to move people quickly."

Using Zoom and phone apps, Skowronski has been talking with doctors and staff at the hospital to learn more about their needs.

"Because there aren't many guns in Ukraine, many of the physicians had never seen a gunshot wound before, and didn't know much about treating the kind of trauma that weapons can cause," he said. "I was able to locate a university medical center in the U.S. that had a video tutorial on treating gunshot wounds and was able to get it online with a narration in Ukrainian."

Skowronski is also frequently on Zoom calls with the nuns to see how their refugee center is doing.

"The nuns tell me many of the families had to flee with barely enough time to dress," he said. "The children had to leave behind their school books, toys and the electronics that kept them connected to their friends and to school.

"The nuns are trying to build a playground so a hundred kids don't have to sit inside in a crowded convent all day. We sent them a few pieces of playground equipment to get them started."

The situation is particularly difficult for teenagers who are too young to fight, but old enough to understand what is happening. Most of their fathers and older brothers stayed behind to fight. They don't know where their friends are or if they are still alive, since they usually don't have phones or computers to keep in touch.

"I'm looking for a school in Alabama that is replacing its computers and might be willing to donate the old ones so we can refurbish them and send them to Ukraine," Skowronski said. "It would make it easier for the older students to find online information for more advanced classes and to get in touch with family and friends when the fighting is over."

The needs are probably greatest at the front lines, but aside from a few medical kits, getting help there is next to impossible.

"There are reports of Sarin attacks and so many people, including civilians, who are trapped and need food and medical attention. Even the CIA couldn't get a gas mask into Mariupol," Skowronski said. "All we can give the people who stayed to defend Ukraine is the peace of mind of knowing if their family fled, there are people who won't let them go hungry, who will tend their injuries and see that they have a safe place to sleep."

"It does my heart good to see the five and ten dollar donations coming in," Skowronski said. "It shows there are a lot of people here who care. Judging by the email address, many of the donations are coming from either active military or veterans. They understand what's at stake."

To donate to Ukraine relief by credit card or PayPal, go to the website, www.Fortunaclinical.com