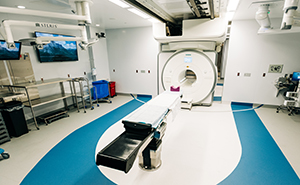 The MRI entering the surgical suite from the center room. The track on which it moves is visible at the top of the image, moving on the track that is stationed at the ceiling.

UAB Hospital is the first in the state and only the fourth in the entire southeast to open a new surgical suite with an intraoperative MRI scanner that allows surgeons to take up-to-date images in mid-surgery.

James Markert, MD, chair of the Department of Neurosurgery in the Heersink School of Medicine at UAB, was the first to use the new suite in February when he performed a craniotomy to remove a brain tumor.

"This suite was sort of a vision that I had for many years," Markert said. "The interoperative MRI allows us to view brain images taken while the surgery is underway to confirm that we have resected as much of the tumor as possible, while leaving healthy brain tissue intact. It also has applications to other surgeries like the LITT procedure."

Before having the intraoperative MRI surgical suite, surgeons performing a LITT procedure would need to stereotactically place a bolt in the patient's skull, put them to sleep, move them to an MRI suite in a different location and then begin the procedure within the MRI.

This new surgical suite is also helpful for brain tumor resection and removal. Markert said it is a constant challenge for brain surgeons to try to figure out if they have taken out all the malignant tissue. "Sometime, we get to a point in an ordinary surgery suite where we just stop, and then the next day we get an MRI scan to see how we did," he said.

With the intraoperative suite, surgeons can stop mid-procedure, do a quick closure of the scalp and get new scans of their progress. The MRI is positioned in a room between two operating rooms, and it is fitted to a special track so that it can be moved into one of the operating rooms in about 90 seconds. The machine slides over the surgical table until it is properly positioned, and the entire process takes seven to eight minutes.

"Once we have scanned the patient, we have an updated MRI to tell us how we are how we are doing," Markert said.

While the intraoperative MRI scanner will be primarily used for brain tumors, it will also prove useful in deep brain stimulation (DBS) procedures for Parkinson's disease, dystonia, or essential tremor in which surgeons implant a device that sends electrical signals to brain areas responsible for body movement in an effort to better control tremors.

"At this time, when we do DBS, the majority of our patients are awake during the surgery so we can test them and make sure we're getting the optimal result," Markert said. "But with the intraoperative MRI, we can stop the surgery when the electrode is in place, and run the scan so that we can be anatomically very precise.

"The MRI suite can be helpful in a variety of procedures, all for the patient's well-being. We provide outstanding care to our patients, but this is going to allow us to go even one level higher. It's really a game changer."