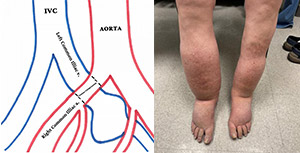 As a cardiologist, I have become accustomed to diagnosing and treating patients with congestive heart failure (CHF), seeing their leg edema, prescribing lasix, doing an evaluation en route to hopefully watching their recovery.

About 10 years ago, I noticed there was a group of patients whose lower extremity swelling was worse on one side than the other and did not improve with diuretic therapy. I later realized that, in fact, they did not have CHF, but rather a completely different problem that would become one of my subspecialty areas of interest - vein disease.

This issue became particularly clear to me when I was asked for a fourth opinion on an octogenarian who had a non-healing large ulcer on her left leg. I recognized it as May-Thurner Syndrome. Once she was correctly diagnosed and treated, she has experienced healing of this large ulcer and continues to improve to this day.

So what is vein disease? And what is May-Thurner Syndrome?

Distinct from the arterial system, the venous system has a unique set of diseases, some of which relate to valves that stop working in a one-way fashion. When this happens, patients are labelled with valvular venous insufficiency (VVI). It has recently been recognized that, in addition to VVI, the veins themselves can have clots (or thrombus) and/or blockages. In the case of the latter, similar to arteries, opening of these blockages can result in improved patient outcomes, as it did for my patient with the non-healing ulcer. One specific blockage of the veins of the legs that is common is May-Thurner Syndrome (MTS) (see picture 1).

The hallmark of MTS is swelling of the legs that is more prominent in one leg than the other, or marked asymmetric edema. This was what my patient had, and I told her the suspected diagnosis and we began the evaluation.

Typical MTS is caused by external compression of the left common iliac vein by the right common iliac artery. >50 percent external compression, diagnosed by computed tomography, magnetic resonance, formal venography and/or intravascular ultrasound, is the criterion for intervention with venoplasty and/or stenting. (See picture 2). Atypical or variant MTS can cause swelling of the right leg greater than left and is diagnosed and treated identically.

Unlike arterial disease where there is a dearth of literature and randomized trials demonstrating treatment algorithms, the entire field of venous disease is at its burgeoning stage, one of the great frontiers in cardiovascular disease at this time, and the treatment paradigms are a major topic of current research studies.

Additional problems can happen in the venous system, such as deep vein thrombosis, pelvic congestion syndrome, and lymphedema. These, as well other diseases, are part of the American Board of Vein and Lymphatic Medicine subspecialty certification.

I enjoy diagnosing challenging patients, evaluating for vein disease, and treating the condition as many effective therapies now exist. May-Thurner is an important, under-recognized, and common cause of lower extremity edema and should be considered by clinicians that see leg swelling.