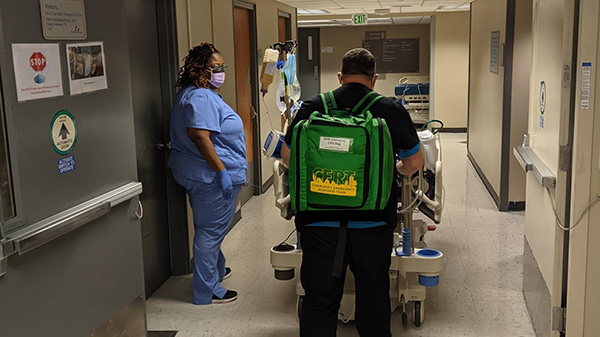 Threading the narrow space between life and death, critical patients often need MRIs, CAT scans, X-Rays and specialized procedures that require them to be moved within the hospital. They are at their most vulnerable during these moves. Something as simple as a change in oxygen pressure can trigger a decline that could tip the balance.

"For staff new to critical care, or anyone who doesn't move patients often, keeping track of so many essential elements can be daunting. There's a lot that can go wrong," Baptist Princeton critical care intensivist Ronald Roan, MD of Southern Anesthesia Management said. "In moving patients who are very ill or seriously injured, the care team may have to watch over the patient's oxygen supply, IV, and multiple tubes and monitors. There could be traumatic injuries or surgical incisions that have to be protected, and if you're working with one of the many ECMO patients we've seen since COVID, you have to be mindful that the patient's blood is moving through the equipment and be vigilant in guarding against leaks."

"For proof of principle, we launched our Critical Response Service (CRS) in January at Baptist Princeton, where we usually see a high volume of critical care cases," Roan said. "It's the first team of its kind in Alabama.

"When a highly trained team does the same complex task every day, several times a day, they can become very proficient. Our CRS team has a paramedic with each move. There are also advance practice care providers, either medical assistants or nurse practitioners, who can write orders and prescriptions to immediately deal with problems that might arise. We have portable ventilators to precisely match the patient's previous settings. This helps to avoid a drop in oxygenation.

"The team has also become very experienced at working with the many ECMO patients who have been referred to Princeton during the pandemic. They are skilled in working with infection risk reduction protocols, and they are prepared to deal with a sudden cardiac arrest, if necessary."

As most decisions on testing are made during or just after morning rounds, the team's hours are scheduled to match the hours they are most likely to be needed. When they move patients, they wait with them and return them to the unit afterward. This allows nurses and respiratory therapists to stay on the unit, caring for their other patients, which is an advantage at a time when there are nationwide staffing shortages.

"Between transport cases, the CRS team can also do procedures such as placing arterial or central venous lines," Roan said. "While on the unit, they can also turn COVID patients on their stomachs to help them breathe easier."

Over the past year, the critical transport team concept has proven its value. However, it has not been added to other hospitals at this time because it has been difficult to get approval for reimbursement. Therefore, the CRS program has been primarily self-funded.

To take advantage of the benefits an internal transport specialty service offers, medical centers may wish to contract the service from an outside source, or set up specialty transport teams. At a minimum, training and regular refresher courses in critical care transport could be beneficial to patients, staff and hospitals.