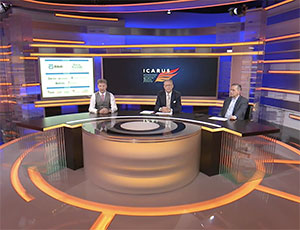 Sometimes necessity is the driving force for creative thinking that leads to something even better.

When the pandemic closed borders early last year, many international medical conferences were forced to cancel. For most people hosting a first-time conference, the prospect would have been daunting. But with a little high-tech help and an agile move online, the initial ICARUS endovascular conference was able to go on as scheduled in Warsaw and reach an audience around the world.

Internationally noted interventional cardiologists from Cardiovascular Associates and Brookwood Baptist Health helped to organize the event and participated in programming. Working behind the scenes, they saw how much online presentation technology could do and they put those insights to work planning an even better online conference for 2021.

Originally from Poland and now based in Birmingham, Jan Skoronski, MD MBA, is one of the foremost interventional cardiologists in peripheral, coronary and structural heart disease. He is an early adopter of lifesaving technologies and has been involved in extensive clinical research into new devices and procedures. He was also a primary influence in launching the ICARUS conference.

"The types of endovascular procedures we are presenting and equipment we are demonstrating in case studies aren't as familiar in many parts of the world as they are in north America and western Europe," Skoronski said. "ICARUS is an important first step in making the benefits of these procedures available everywhere. As a free conference available online, it eliminates the barrier of travel expenses and restrictions on how many people can participate.

"To communicate effectively in an online format, we have to consider that our viewer may be watching in an environment where other things are competing for attention. Our viewer's eyes are also accustomed to seeing sophisticated content on screen. Computer generated special effects in movies, TV, gaming and online presentations have set a higher bar. It's not enough to put an expert in front of a microphone, turn on a camera, and let the speaker talk. We had to engage the audience and hold their attention to communicate the points we want to convey."

The first thing Skoronski did to prepare for a more dynamic 2021 conference was to change the presenting format. Instead of experts giving long speeches, he limited the time for opening remarks to the essentials necessary to cover the key points of a teaching case. Then the presentation moved into interactive mode, with real-time questions and answers with the audience, discussion of the cases between experts, and in one case a debate between a vascular surgeon and an endovascular cardiologist on how they might approach the same case differently and the advantages each choice could offer.

Another part of the engagement strategy included a professional host, multiple cameras, and a set and graphics comparable to a TV news show.

The strategy paid off. The number of viewers continued to rise steadily as the conference went on and word of the event spread. All over the globe, health professionals were listening in their choice of English, Polish or Russian. They were watching from eastern and western Europe, north and south America, Africa and as far away as Siberia and China.

Known for his groundbreaking work in the development of the first FDA approved coronary stent, Gary Roubin, MD of Cardiovascular Associates was a panelist in the carotid session.

"The ICARUS conference was one of the first endovascular online events during the pandemic in 2020. The organizers created an even better version in 2021," Roubin said. "We had great discussions and reviewed some really great cases. This is one of the most engaging conferences in current medical education."

Skoronski also participated in discussions and a third physician from Cardiovascular Associates, Matthew Sample, MD, FACE, used a teaching case to demonstrate a technology that is still new to much of the world.

"After abdominal surgery, a woman in her 80s was complaining of shortness of breath," Sample said. "The problem was an embolism in her pulmonary artery. In the past, we might use blood thinners, watch it and hope for the best. The problem with that approach is that it gives the clot more time to cause difficulties and it extends the time the patient has to stay in the hospital.

"In this case, I used the INARI FlowTriever system with a microcatheter that allowed me to grasp the clot and remove it. The patient did well and the problem was resolved quickly. In cases where a clot has moved into a vessel that is too small to introduce the catheter, it wouldn't be an option, but it can make quite a difference in the right cases. I enjoy sharing what I've learned with cardiologists in other parts of the world so they can use these skills to help their patients."

Archives from 2021 will soon be on YouTube for review, and work is already underway in planning the next ICARUS online conference for 2022.

"We hope to continue improving each year," Skoronski said. "If we can start getting the pandemic under better control, perhaps we can have a hybrid event. People could be watching online while a studio audience asks questions and participates in discussions."