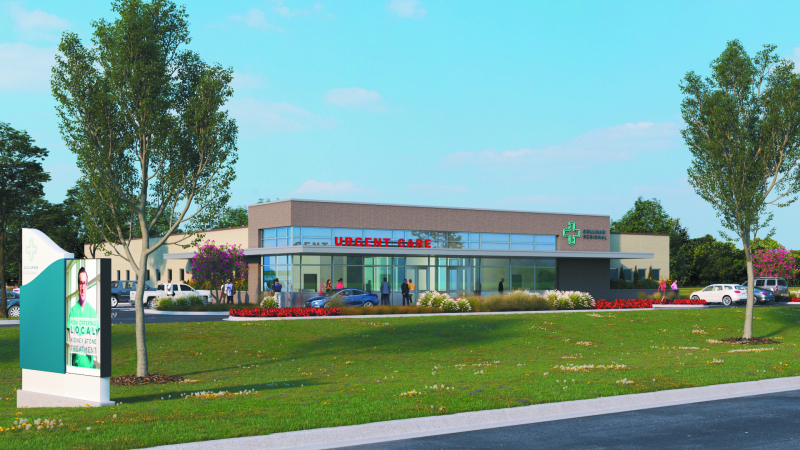 The new premise offers a large number of outpatient services in a single location without the complexities of negotiating a hospital. "A hospital can be a bit of a maze to walk through, just for a doctor's appointment or test," Clements says. "The health park, instead, offers several facilities that allow patients to reach specialists, therapists, and diagnostic tests without the long walks and confusion. It's easier to access. You get to drive up, walk in, and get it done."

Cullman Regional managers decided on the specialties based on the needs of that area. "We've been in the Hartselle market for five to six years, just talking with local providers, businesses and local leaders, asking what services they needed, what specialists," Clements says. "We've also watched referral patterns at our hospital to help pinpoint what has been most requested from that area."

The specialists will come from a pool of independent physicians and those already employed by Cullman Regional. "We will be recruiting new physicians as well," Clements says. The various providers will commit to a half day a week in the clinic, offering a rotation of medical care that can extend to cover areas such as pain management, wound care, and ortho pediatrics.

Phase 2 of the health park includes a separate imaging center. Opening in October, the center will perform MRIs, CT scans, ultrasounds and x-rays. Set about a block from the specialty clinic, the testing site allows patients to get diagnostic tests without having to drive the much longer distance to a larger urban area or hospital.

The other part of Phase 2 houses an urgent care center with six exam rooms, including a procedure room, and a lab. The center will improve after-hours access to medical care for Hartselle and its outlying regions.

Hartselle is a community of 14,400 residents that lies about 30 minutes north of Cullman. "In our market area, Hartselle is the next largest city, allowing us to reach the most people," Clements says. The population is only slightly less than Cullman's 15,400 residents, but had no specialists in residence. "This park not only brings access to specialty physicians and services to Hartselle, but also to the rural areas that surround the town."

For Clements, health parks are a step toward integrated care. "Our definition of integrated care is fairly broad," he says. "We think it means collaboration between healthcare providers to coordinate treatment and improve the patient's overall wellbeing. And, of course, payors are trending toward systems that demand more collaborative care because it is a more efficient, higher-quality model since you are coordinating and communicating between what can be a complex issue that has many different inputs.

"The umbrella of a larger healthcare system creates that efficiency and quality. Communication between providers of the same patient flows more easily and accurately with physicians, diagnostics and treatment input under one records system. The medical personnel and protocols are also vetted by and are accountable to the hospital."

Health parks also add a versatile way to evolve and adapt to the area around it. "The real benefit is that health parks can be tailored to accommodate the health care needs of each community," Clements says. Having worked in healthcare in Atlanta for 25 years, Clements has had exposure to the usefulness of health parks where Wellstar Health System has built five since 2012. Cullman staff also researched successful parks in Orlando and Tampa.

Demand for outpatient services has increased with the rise in high-deductible health plans prompting patients to be more cost-conscious about their medical choices. An American Hospital Association report found that in 2016 hospitals' net outpatient revenue ($472 billion) nearly matched inpatient revenue ($498 billion) for the first time. And hospital revenue from outpatient services has grown from 30 percent in 1995 to 47 percent in 2016.

"Health parks only makes sense," Clements. "They offer convenience and collaboration and closer access to a higher level of care. There will be as many services here in Hartselle as a small hospital offers."