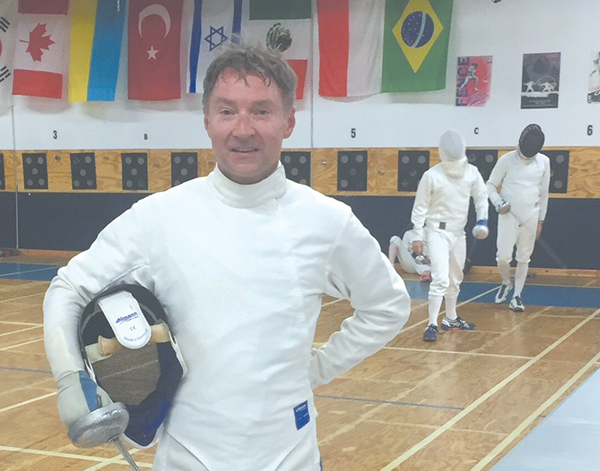 Skowronski at the Birmingham Fencing Club

Everyone considering job possibilities has a list of requirements for their prospective new home. For Interventional Cardiologist Jan Skowronski, MD of Cardiovascular Associates, part of the Brookwood Baptist Health Specialty Care Network, one of his must-haves was a quality fencing club. Luckily for Birmingham-area heart patients, the Birmingham Fencing Club fit the bill, and when he accepted a position with CVA, he joined the fencing club on his first day.

Skowronski's interest in fencing began when he was a pre-teen in his native Poland. "On my street we had a good fencing club that raised two world champions," he said. "I fenced for six years and was on the Polish Junior National Team as a teenager. I wasn't on the Olympic team because I was too young and too weak."

His career choice put his hobby on hold for 20 years, but while living in Chicago where he served as the cath lab director at OSF, St. Anthony Medical Center, he began fencing again. "It was like riding a bike," he said. "I got back into it, and I was pretty good."

Skowronski, who fences with an épée, which is the largest of the three weapons for the sport, fences at the club with fellow members every Saturday including, occasionally, his 13-year-old son, Alexander. "We try not to fence against each other much because I'm still better than he is," he said. "But recently we fenced, and he was very close. I don't think it will be long before he beats me."

Skowronski is passionate about the sport. "I don't think I would be as successful a physician if it weren't for fencing," he said. "It's a strategic game. You have to be fit physically, but it's mostly about strategy. How do you overcome your opponent with technical skills and your mental strength? It's a great individual sport.

"In America we are into team sports like football, soccer and basketball. But I think for teenagers who are developing their ego and their own personality, fencing a great sport. It lets you make decisions in front of an opponent, one on one. It's great training for forming character and making split-second decisions. Before the fight, you have to think about the strategy. I recommend that parents encourage their children to try it. It's an elegant sport."

Reflecting on his childhood in Poland, he says, "we were not destitute, but not rich either. My father was a university professor, my mother was an assistant professor, and my grandfather was a recognized scientist. Communists were in charge, but we tried not to pay attention to them. We even had an expression called 'internal immigration.' Meaning that you physically lived in the country, but you didn't pay attention to official news because it was all lies. We didn't really listen to the government's official party line. We had close-knit families and groups of friends and just tried to ignore the Communist government as much as possible. But we read a lot and had access to world-class literature. Our teachers were relatively strict, but comparatively good. I read a lot. I would read four to six books a month. I wish I had the same pace now."

He has no regrets about coming to the U.S., but says his friends in Poland have done very well. When he goes back to visit, they insist on paying for his drinks. "They say I'm just a poor doctor in America, so they pay the bill," he said with a laugh. He hopes to return soon to visit his mother.

He also loves to travel with his family. He has been to the Holy Land often, and when his son was 11, they completed a night ascent to Mount Sinai to see the sunrise. It required waking at 1:30 a.m. and doing the five-hour ascent in complete darkness. When it is safe to travel again, he hopes to take his family to Uganda to track mountain gorillas.

But despite his travels, Skowronski always looks forward to returning home to Birmingham. "I live here and enjoy every single day. We have been proud recipients of Southern hospitality. The transition from Chicago to Birmingham has been much easier than I thought it would be for the whole family," he said. "I just show up every day and try to help."