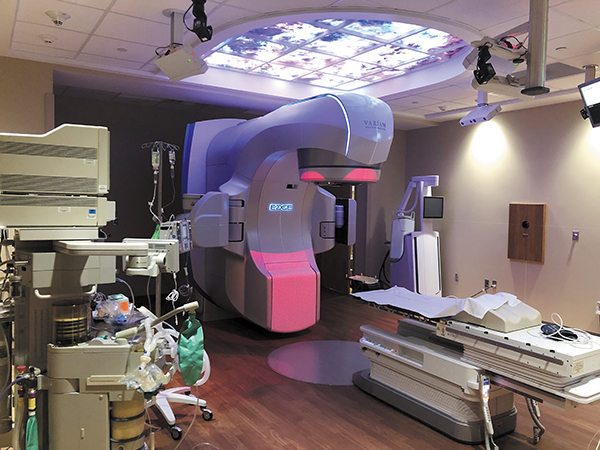 The new Varian Edge® radiosurgery system, currently available only at UAB, delivers beams of radiation to a precise point in the brain that triggers tremors while minimizing damage to surrounding tissue.

Essential tremor is a progressive neurological disease that affects about 10 million people in the United States. There is no known cause for the disease, but now there is an improved, non-invasive treatment option using the new Varian Edge® radiosurgery system, a novel delivery method using a so-called "virtual cone." This treatment delivers beams of radiation to a precise point in the brain and targets

the spot that triggers the tremor while minimizing damage to surrounding tissue. It is currently available only at UAB.

Essential tremor can appear as early as the 20s or later in a person's 50s. The tremors often worsen until they impact daily activities of living. "It can affect simple things such as holding a spoon or a glass," says Markus Bredel, MD, PhD, professor of radiation oncology and the Sharon A. Spencer Distinguished Endowed Chair in Translational Radiation Oncology at UAB. "Medications sometimes work, but many patients become refractory. Side effects are also a possibility, so additional treatment is needed."

"Deep brain stimulation (DBS) is the current gold-standard treatment for medically refractory tremor and has been used for many years," says Guthrie, who has effectively treated thousands of patients with DBS. "However, a downside of DBS is that it is invasive with patients awake during the procedure. Some patients may not like that and may also object to carrying an implantable device."

Traditionally, SRS procedures to treat tremor have been performed with a gamma knife. "The gamma knife procedure is effective, but it can take more than two to three hours. Also, it is invasive to some extent, because we have to fit a metal frame that is screwed into the scalp. That can be uncomfortable and can be an issue for claustrophobic patients," Bredel says. "More modern linear accelerators (LINACs) have also been used for functional SRS on tremor patients but requires a physical cone-like structure to be attached to the LINAC, which is logistically complicated and can lead to radiation mis-administrations. It also increases the time required for each procedure, which decreases patient volume."

Bredel and his team have improved the process by creating a "virtual cone" technique on the Varian Edge® system, a new LINAC first used at UAB for functional SRS. "The Edge can fire the radiation quicker so we are able to cut treatment time to 30 to 45 minutes as opposed to the two to three hours required on the gamma knife," he says. "That is important, because most tremor patients aren't able to lie still for long periods of time. The Varian Edge® replaces frames and physical cones with non-invasive, image-guided techniques that deliver radiation with extreme accuracy. Tremor is reduced significantly in 80 to 85 percent of patients."

Another plus for the functional SRS procedure to treat tremor on the Varian Edge® is the elimination of the invasive metal frame. The new procedure uses only a plastic mesh face mask that leaves the middle of the face open. "Even for claustrophobic patients, it isn't an issue," Bredel says.

UAB is conducting a clinical trial for the procedure, but patients do not have to enroll in the trial to be candidates. Bredel says they are using advanced magnetic resonance imaging in the trial. "It is a precision medicine approach. We strive to assess each individual patient's brain function and connectivity that is potentially involved in their tremor instead of using estimates based on knowledge of thousands of prior cases," he says.

Success rates show that the majority of patients undergoing radiosurgery with the Varian Edge® had relief following the procedure. "Patients have relief from their tremors, and we haven't seen any side effects from the procedure," Bredel says. "It is a promising treatment, and we are excited to be a part of its introduction to the medical community."