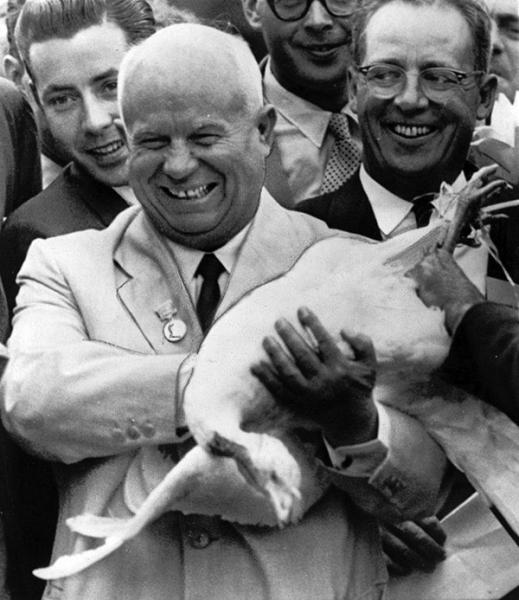 Khrushchev and a friend.

In 1959, American was buzzing with anticipation over the upcoming meeting between Vice President Richard Nixon and Nikita Khrushchev, the leader of the Soviet Union. The Cold War was raging, the powder keg of East and West Berlin set to explode at any moment, while Soviet tanks crushed Hungarians and Americans built backyard bomb shelters.

The fervent hope was for a kumbaya moment with the leaders finding some common ground. Instead, human nature being what it is, the two men spent most of their meeting jockeying to one-up each other.

Nixon showed Khrushchev an American kitchen, full of great new labor-saving devices like a tap on the refrigerator door, allowing lucky Americans to pour water right then and there, without having to fuss with opening the fridge.

Khrushchev scoffed at our new tech utopia, asking if there was a machine that puts food into the mouth and pushes it down.

Of course, consumers won the cold war, the Evil Empire fell, and today Khrushchev's own granddaughter is a professor in New York City. Et tu Nina?

All this is to say that I thought of Khrushchev the other day when I opened my mailbox and found a postcard telling me that I needed a sandwich press. Thankfully, someone in marketing figured out that my sandwiches are too fluffy.

This caused me to stop before I'd had the chance to make my single-cup coffee serving, and wonder about our consumer economy.

Don't get me wrong. I love capitalism. I'm a capitalist. I've benefited greatly from our system and own a business that I enjoy. I get to plug away at my laptop, assigning and editing healthcare stories in my air-conditioned office, which is much better than pushing logs through a sawmill in Siberia or pounding boulders in a Ural rock quarry. In fact, while those silly Soviets were crushing rocks for heavy industry, American ingenuity won the day yet again, selling pet rocks.

Yes, we have created many wonderful life-improvements. We ditched drinking plain old water for yummy sodas. Of course, we're back to water now, but it's much better because it comes in colorful bottles and we pay for it. I have a fantastic, big-screen TV with 300 channels. It has high-definition, which they're going to improve to super gigantic high-definition because , you know, seeing every pore on Anderson Cooper's face just isn't enough.

And thank God, we've replaced rakes with leaf blowers so that we don't have to work our biceps and deltoids any more. That's what gym memberships are for.

But I still have to ask, have we reached the point of diminishing returns with each new easy-life device? After all, the system that gave us antibiotics and air conditioning also thrust Kim Kardashian on us.

I hate to be un-American, but I'm not sure I need a mattress that conforms to my body or one where I adjust my sleep numbers.

All of which brings me to the Peloton, the hot new indispensable item.

Fans: A bike? Are you nuts? It's a technology enabled cardiac device that assists in whole body aerobic activity.

Me: Well, I do have a bike. Isn't that good enough?

Fans: You don't get it. You can ride this indoors. And it has a screen.

Me: Yeah, but even though I have to ride my bike outside, I can do it with friends.

Fans: Silly old man. This has a trainer on the screen, along with a bunch of other riders. And best of all... it's high definition.

Cuz you know we've got to see those pores.

Steve Spencer is the founder, owner, editor, bookkeeper, and general flunky of the Birmingham Medical News.