Life-saving Battlefield Tourniquet Approved for Use by Alabama First-Responders 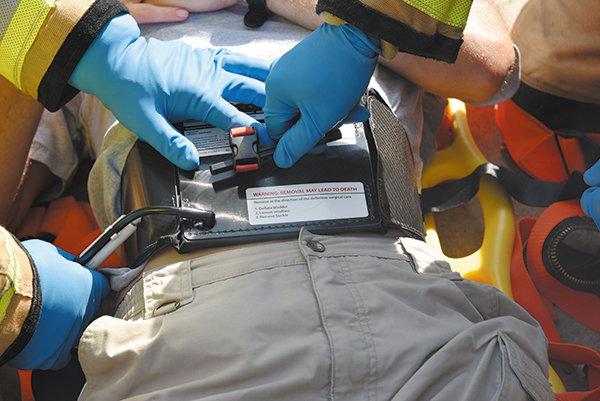 The tourniquet places pressure on the abdomen to help stop blood flow.

The Abdominal Aortic Junctional Tourniquet™ (AAJT) that treats both pelvic hemorrhage and severe bilateral lower junctional hemorrhage has been approved for use by paramedics and other first-responders in Alabama. The AAJT, approved for military use in 2012 by the Federal Drug Administration (FDA), has saved many lives on the battlefield. Studies now show it also has applications for civilian populations and can assist emergency responders with patients who have massive, uncontrollable bleeding.

New research has shown that the AAJT capabilities are equivalent to Resuscitative Endovascular Balloon Occlusion of the Aorta (REBOA) in Zone 3 of the aorta which extends from the lowest renal artery to the aortic bifurcation. "REBOA can be life-saving in trauma patients, and now we have data that shows the AAJT is equivalent to this intervention," says John Croushorn, MD, an emergency medicine physician and one of the inventors of the tourniquet. His company, Compression Works LLC, (compressionworks.com) is the developer and manufacturer of the device.

"The significance is remarkable," he says. "The cost of the most popular REBOA kits is just less than $2,000, requires a physician to perform the procedure using ultrasound, and has similar risks to a cardiac catheterization. The AAJT costs about $500 and can be placed by anyone. No knowledge of anatomy is required and it does not involve the invasive risks of the REBOA procedure."

This alternative use of the AAJT device was observed in 2013 by a British military physician who was using the tourniquet on a severely wounded soldier. As he monitored the patient's end-tidal carbon dioxide (CO2) levels, the patient's CO2 dropped to a morbidly low 16 percent. "When they put the AAJT device on the soldier, his CO2 increased to the normal level of 60 percent in 60 seconds," Croushorn says. "That is one of REBOA's effects, and we saw it before we even knew about REBOA."

Jason Rall, PhD, Senior Research Scientist at CFD Research Corporation in San Antonio, TX, and his colleagues studied the REBOA and AAJT techniques for pelvic and high junctional injuries in the field. Their findings concluded that both the AAJT and Zone 3 REBOA were equivalent in the effects on cardiac output, systemic vascular resistance, and mean arterial pressure.

"They found no differences in peripheral capillary oxygen saturation (SpO2) and the partial pressure of oxygen (PaO2)/fraction of inspired oxygen (FiO2) ratio," Croushorn says. "If the two interventions show the same survival, hemostatic, hemodynamic and metabolic profiles in multiple studies, why wouldn't you use the alternative that is less invasive, less expensive, safer and quicker?"

Croushorn points out that the device, being equivalent to REBOA, enables paramedics to perform the same life-saving intervention at an accident scene that physicians would provide at a hospital. "The AAJT procedure provides a bridge mechanism to help get the patient to the hospital alive," he says.

Another exciting study related to the AAJT was presented at the Military Health System Research Symposium recently. Researchers from the 59th Medical Wing of the Air Force in San Antonio examined the use of the AAJT in cardiopulmonary resuscitation (CPR) following cardiac arrest. "Traumatic cardiac arrest is a difficult problem, because standard CPR is ineffective," Croushorn says.

The research showed the AAJT improved outcomes in a traumatic cardiac arrest model precipitated by Class IV hemorrhage and remained in arrest for three minutes before resuscitation was started. "It wasn't just a subtle improvement," Croushorn says. "A Kaplan-Meier survival analysis showed a survival rate of 83 percent with the AAJT application. Hemodynamically, carotid blood flow and carotid blood pressure increased with the tourniquet."

Croushorn says he and other long-practicing physicians in his field don't completely understand how this type of resuscitation can occur. "As a doctor who has done this for 20 years, I still don't understand the physiologic capability of stopping all the blood flow through the aorta," he says. "It is dramatic in the potential life-saving that can occur, and for a paramedic to have that resource in-hand is amazing."

Croushorn and his colleagues continue to study the capabilities of the AAJT and currently are working with the military to determine if a small revision in the tourniquet can treat non-compressible torso hemorrhage. They are also working with physicians in third world countries to ascertain the potential impact of the AAJT on post-partum hemorrhaging, a major cause of death in that part of the world.

"I am excited about this innovation for what it can mean to the people of Alabama and for the potential it has to affect people worldwide," he says.