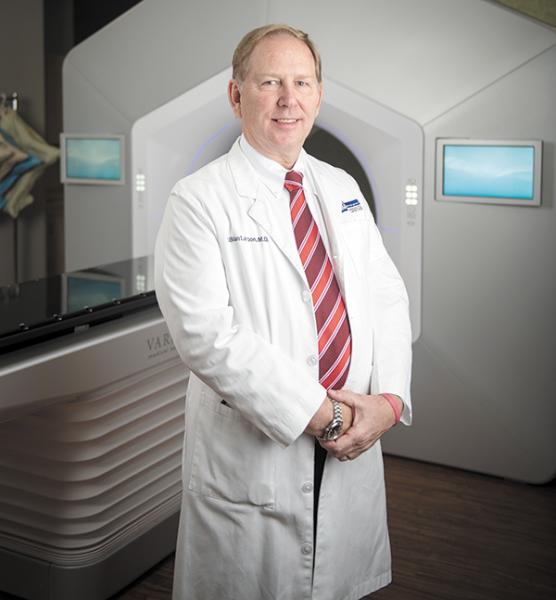 Today's radiation therapy for the treatment of cancer was a high-tech advance when it was introduced decades ago. But now there's a brand-new generation of the machines, the Halcyon Linear Accelerator, that its user, Urology Centers of Alabama (UCA), calls transformative.

"This new linear accelerator delivers radiation treatment with an innovative design that has several advantages," says radiation oncologist Brian Larson, MD of UCA. Their machine is the first in the Southeast and one of only 20 around the country.

"The typical linear accelerator has a large head that moves around the patient," Larson says. "But with this design, the moving parts are enclosed in a gantry so that it runs like a CT scan, allowing the gantry to move much quicker. It rotates around the patient four times as fast as the typical linear accelerator. The high dose rate delivers radiation faster and controls the shape of the radiation faster so the treatments take far less time. The beam time is two minutes, so the patient can be in and out of the treatment room in five minutes whereas it used to be 15. It's easier for the patients because they don't have to lie there as long, and it gives the therapist more treatment options to schedule appointments when it's convenient for patients."

Other patient enhancements include a lower couch for easier access when entering the machine and soft ambient light inside the enclosure. The machine is more than twice as quiet as other systems, and includes a couch-mounted camera so the physician can watch over the patient, and a sound system making it easier for the patient to communicate with the therapist.

Besides the improved speed and comfort for patients, the machine offers many improvements for the physician. "It's a more precise treatment that delivers radiation much more accurately and the results have been even better than I expected," Larson says.

One advancement is a greater streamlining of preparation time. Lason says: "The handling of the radiation beam data is a very complicated process, because you have to know how much radiation the beam puts out at every single treatment field so the computer can calculate an exact dose.

"Traditionally that's a long, tedious process that involves a physicist going in and measuring every one of these. It can take weeks to prepare to calculate the radiation dose. The designers of this machine have figured out a way for all of this to come pre-packaged. And because it's able to give the radiation in a different way, the dosimetrist can really innovate with the planning.

"Just looking at the plans and seeing the therapist interact with the machine, the ease of use and simplicity make it very ergonometric, both for the therapist doing the treatment and for the patient."

Health experts say this technology is the new standard for linear accelerators of the future because its features help simplify the increasing need for cancer treatments worldwide. In the U.S. alone, cancer diagnoses for 2017 numbered more than 1.7 million.

Still, says UCA president Taylor Bragg, MD: "Every day we seem to be gaining ground in the fight against cancer. The Halcyon system presents our team with the ideal platform to treat patients using best practice delivery of radiation oncology. This allows increased efficiency while delivering high-quality treatments.

"It's an amazing piece of equipment, and we're excited for Dr. Larson and his team because they've done a great job for so long, but now have the newest equipment that allows for even better quality, safety, and accuracy. We're in a unique situation now, where we can offer our patients with prostate cancer the robotic surgery, the highest quality radiation, and chemotherapy without them ever having to leave our office.

"We hear a lot about patient-centered care, which is so important with patients living longer and having multiple different medical issues. We're able to individualize that treatment. They can come to one location and know they're going to be treated professionally and that's exciting to us."