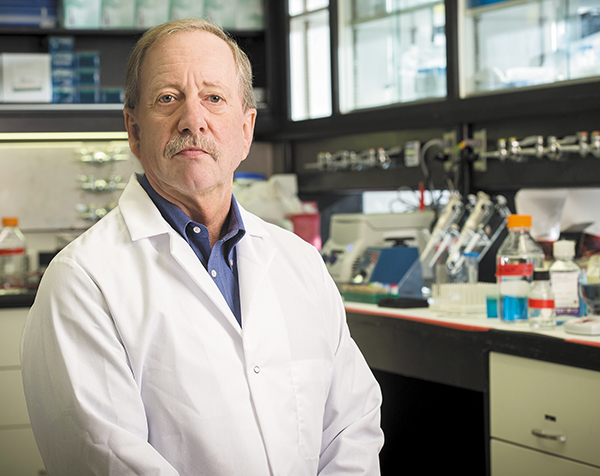 Is a natural defense against cancer in youth killing us with age?

"Nature was good at selecting for traits that helped us survive from infancy to reproductive age. After that, it didn't concern itself much with helping to develop genes to stay healthy and live a long life," Steven N. Austad, PhD, Chair of the Department of Biology at UAB, said. "People didn't live past middle age until the past century. With vaccines, antibiotics, medical advances and a more stable food supply, we have extended life expectancy. However, the diseases of aging are causing a tremendous amount of suffering and the economic burden is becoming overwhelming."

Cellular senescence, a process thought to have evolved as a protection against cancer, is now suspected in damaging other cells and contributing to the aging process.

"Healthy cells are programmed to divide in order to allow growth and replacement, but when cells are damaged, some of them become senescent," Austad said. "They can no longer reproduce, which prevents proliferation that might become cancer. The problem, however, is that senescent cells don't die. They continue to live and begin to secrete proteins that can be damaging to surrounding cells."

"As time goes on, we accumulate more and more senescent cells that secrete an ever greater volume of harmful proteins. The moles we seem to notice more as we age are full of senescent cells."

What causes a cell to become senescent? It can follow physical trauma, chemical stress, UV damage, radiation, and a variety of other exposures that are damaging to healthy cells.

Investigators who study the diseases of aging began to wonder if the byproducts of senescent cells might play a role in driving the aging process. Exactly how bad are they?

"For the past few years, researchers have been looking for ways to remove senescent cells to stop them from causing damage," Austad said. "Recently, some labs doing mouse studies developed a way to eliminate senescent cells. After deletion, those mice were healthier and lived longer.

"This has become one of the hottest areas of aging research. Several pharmaceutical companies are working to find drugs that could do the same in humans."

Drugs to eliminate senescent cells may not be the fountain of youth, but they could go a long way toward preventing or slowing some of the cumulative damage that develops through the years. Research into aging and longevity are becoming very active areas of investigation.

"In all my years in the field, this is the most exciting time I can remember. So many new findings are being reported, and so many targets identified that could help us take on the problem from different angles," Austad said.

A new concept that has recently raised a lot of interest is "young blood."

"No, it isn't a plot for a scary movie, but it may have created a way for enterprising grad students to make a little pocket money if they don't mind parting with a bit of their plasma," Austad said. "It's too early to know how to apply this information, but after the first reports came out, people who didn't want to wait were offering sizeable sums for transfusions.

"Older mice given the blood of young mice showed rejuvenation and improvement in disorders associated with aging. Even plasma alone worked, so there is something in young blood that reverses some of the symptoms of aging. We don't know what it is or how much is needed to be effective, but several drug companies are working on identifying it and turning it into a medication."

A number of studies are now underway at UAB, looking into the causes of aging and ways to intervene to prevent or delay the damage that leads to the diseases of aging. Among the most promising possibilities in Austad's lab is the use of rapamycin, which has significantly extended the lifespan of mice.

"It's a transplant drug already approved for use in humans, but we don't yet know how well it will work to treat aging in humans, or what dosage would be most effective," Austad said. "We are working to see what the effects are when the drug is given at different times in life."

Rapamycin was developed from a bacterium found on Easter Island and it inhibits a protein that regulates growth and metabolism.

n addition to identifying the many factors contributing to aging, there is a long list of questions yet to be answered by research. Is aging an inevitable side effect of living? Could it simply be a defect that hasn't yet been edited from the genome of life? Why do women live longer than men, and small dogs live longer than large? How is it that mice live only two years while bats can live up to 50? What are the lucky genes that allow some people to be spry and mentally agile at 100, while others at 65 are already moving as if they are 90 and showing a decline in memory? Perhaps most intriguing of all, what are the outer limits of natural human life expectancy if the preventable causes of aging could be eliminated?

Austad and another researcher have a running bet about whether someone alive today could live to be 150. Although he doesn't expect to be around to collect on the bet, Austad believes the data from new research findings suggest it just might be possible.

"This isn't a quest for immortality," he said. "We need to identify the roots of aging and find solutions because aging is the number one risk factor for the major causes of morbidity--heart disease, stroke, cancer, COPD, and diabetes. It's a factor in the pain and loss of mobility from muscle and joint problems, blindness and other ailments that cost us so much in quality of life and healthcare dollars.

"We want to improve health span. If we can give people more productive years, and in the process, add a few years to life, that would be great."