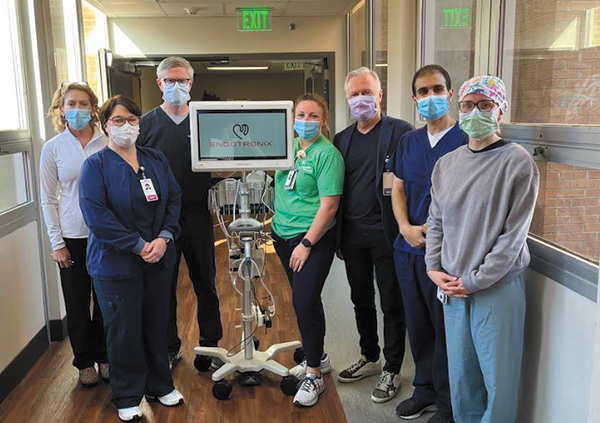 Heart failure is the number one cause of hospital admissions for Medicare-age patients in the United States. It directly accounts for 8.5 percent of heart disease deaths, contributes to up to 36 percent of all heart disease deaths, and it is mentioned in one out of eight death certificates. The global economic burden is $108 billion per year and the human costs are immeasurable.

More than half-million Americans will get the bad news this year that their heart is beginning to fail. The course of their disease is likely to be progressive, robbing them of the vitality to do many of the things they enjoy. Medications have been developed to treat the disease, but for maximum effectiveness, there is still the challenge of getting the right drug to the right patient at the right time.

"Patients with heart failure tend to already be on several medications," cardiologist Barry Rayburn, MD said. "The difficulty has been our ability to recognize when those medications need to be adjusted in time to avoid more damage and the need for hospitalization.

"Ascension St. Vincent's was selected to test the Cordella Heart Failure System as part of a large international research study, the Proactive-HF Clinical Trial," Rayburn said. "Dr. Christopher DeGroat and I are the implanting physicians, and Dr. Alain Bouchard is the principal investigator in our Birmingham office.

"When we see pressure changes that suggest a problem, we can act immediately to prevent further damage. Medications or dosages can be changed and combined with other interventions. We hope that by giving us the ability to respond quickly, the heart failure monitor will help us avoid the need for hospitalization and help to slow or prevent progression of the disease."

"In addition to that, because we can see daily changes in pressure, we will get an early indication of which patients are likely to respond well to a particular medication and when we may need to move on to try another option." This allows doctors can make those change sooner, which means the patient won't have to wait until his/her next office visit for improvements in medications.

In this catheter-based procedure, the sensor is implanted using venous access through the leg or neck and positioned just to the right of the sternum.

"The procedure is usually well tolerated, even by patients with more advanced heart failure," Rayburn said.

"Another major advantage is that the sensor doesn't require a battery or internal power. The system includes a hand-held unit about the size of a phone. Patients simply place the unit against the skin to the right of the breast bone. The unit connects with the sensor, records the reading and transmits it directly to the cardiologist's office."

Developed by Endotronix, the Cordella Heart Failure System is undergoing what is expected to be final clinical testing before data is submitted for approval. Local investigators are hoping to complete recruitment of participants by the end of the year.

"We are primarily looking for participants who might be at risk of hospitalization to treat heart failure. One of the best predictors of that risk is a previous hospital admission for the condition," Rayburn said.

If you have a patient who might be a good candidate for the trial and you are interested in learning more about it, you can talk with any of the three investigators at the Cardiology Specialists of Birmingham office on the campus of Ascension St. Vincent's in Birmingham at 205 939-7100.