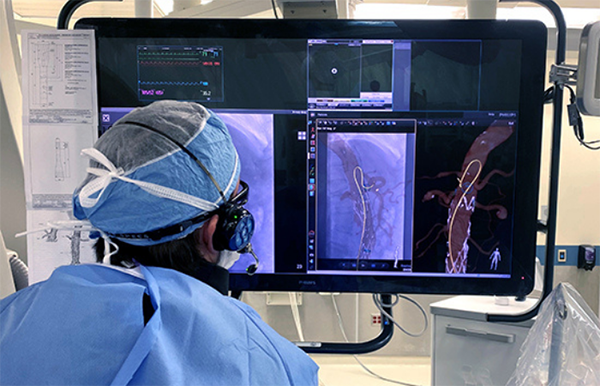 The UAB Cardiovascular Institute is one of only six centers in the world with a new light-based, visualization technology called Fiber Optic RealShape (FORS). Adam Beck, MD, the director of the UAB Division of Vascular Surgery and Endovascular Therapy, performed the first procedure in the southeast using the technology last November, making UAB one of only three locations in the U.S. to utilize FORS. The other two centers are UMass Memorial Health and Beth Israel Deaconess Medical Center in Boston.

The navigational technology, currently used at UAB for complex aortic repairs for aneurysms, relies on fiber optics in both the catheter and the guidewire. Tethered to a computer, the flexible microscopic glass fibers relay data defining the location of the devices. "It cross talks with your imaging equipment to show the entire length of the catheter and wire, overlaid with three-dimensional images of the arterial anatomy," Beck says.

With this technology, surgeons see a 3D version of the wire in yellow and the catheter in blue on the monitors. It even shows the position of the wire within the catheter, on top of a ghost-like, grey background of the body and vessels produced by fluoroscopy and pre-op CT scans. As the devices move, the image reflects that motion in real-time. "They look a bit like a video game," Beck says. Prior to FORS, just a two-dimensional image would show.

Unlike fluoroscopy that requires stepping on a pedal to trigger a flow of x-rays that show the movements of devices, FORS generates continuous data without any effort from the surgeon. "With FORS, the computer system knows exactly where the catheter and wire are inside the body, so you don't have to step on the fluoroscopy pedal as often during the procedure," Beck says.

That also means less radiation exposure for everyone in the operating room, which accumulates over the life of health providers' careers, despite wearing protective gear. "I wear 15 pounds of lead on my shoulders while I do these procedures all day long. It's heavy," Beck says. "Hopefully at some point, we'll be able to do the entirety of the procedure with this technology, without the need for lead protection."

The surgeon can also access more viewing options with FORS, and without needing to move imaging equipment mid-procedure. For example, the superior mesenteric artery--one of the blood vessels to the intestine--runs toward the front of the body versus left to right. "So if I'm going to watch the wire navigate into the superior mesenteric artery on normal fluoroscopy, I have to turn the gantry angle all the way lateral," Beck says, requiring shifting of major equipment mid-surgery.

With FORS, the surgeon or IR technologist uses the computer to rotate the view of that vessel in 3D on one of the two screens. "I can see the wire and catheter moving in multiple views at the same time," Beck says. That fluoroscopy-free capability also lessens radiation exposure.

This new navigational tech also offers angles of view that are physically impossible with the more cumbersome fluoroscopy. "If you needed a view directly from the feet to the head for a vessel with a funny angle, you might not get that with plain fluoroscopy," Beck says. "But with FORS, someone can just take their mouse and turn the patient and their aorta right on their head and you can watch the catheter and wire navigate in that angle."

Beck notes that this is the very first generation for this technology. "You still need to touch on the fluoroscopy pedal for non-navigational parts of the procedure, like initially delivering wire into the body," he says.

In addition, FORS is currently limited to only two catheters and one type of wire, where most vascular suites and interventional radiology departments stock hundreds of catheters in various shapes, stiffness, diameters, and lengths. "But you can navigate into nearly any vascular bed with these three options right now, except intracranial or coronary arteries," Beck says.

But Philips, the FORS maker, already has plans to mitigate that limitation. "One of next big things from this company is a system that will allow attachment to any catheter," Beck says. They also plan to produce an array of wire lengths and widths to enable its use in other procedures.

"This technology will get expanded pretty dramatically over the next few years," Beck says, including reaching into other specialties, like neurosurgery, interventional radiology, and cardiology. "All of these specialties will benefit from this technology."