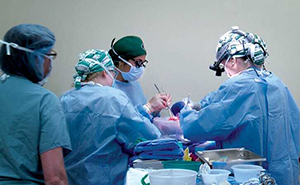 The team preparing the kidneys for transplantation.

One of the biggest tragedies in modern healthcare is that, while transplants are hugely effective for failing kidneys with a 96 percent success rate, there are only about 25,000 kidneys available annually with 800,000 patients who need them. Doctors have to deal with the heartbreak of having patients who might die before they can receive an organ for transplant.

The UAB Marnix E. Heersink School of Medicine took a big step toward solving this problem and potentially saving hundreds of thousands of lives when they performed the first successful transplant of genetically modified pig kidneys into a brain-dead human. The results of the surgery were released in a peer-reviewed paper in January. The surgery, which was performed in September, was the result of years of work and research in the UAB Xenotransplantation Program, which was launched in 2016 with a $19.5 million grant from United Therapeutics Corp.

Pigs are considered a good candidate for xenotransplantation because their organs to similar sized to human organs. For this surgery, the donor was housed at a clean facility where the pigs are kept free of specified infectious agents like pig cytomegalovirus through rigorous practices of veterinary care. In addition, through herd husbandry, the porcine endogenous retrovirus C (PERV-C) has been bred out of the pigs, helping to prevent the chance of PERV transmission to human organ recipients. The donor pigs are tested every three months by the University of Minnesota Veterinary Diagnostic Laboratory for 13 pig viruses and one mycoplasma.

Using Crispr, ten genes were changed in the donor pig. Four pig genes were disabled, including three that would cause hyperacute rejection, along with the pig hormone growth receptor gene, which was deleted to prevent the kidneys from growing too large in the recipient. Six human genes were inserted to help prevent rejection.

Before the surgery, UAB researchers generated safety and feasibility data by applying tests that could not be done in previous work involving non-human primates. "We developed a novel crossmatch assay that helped us predict that the donor organ would be compatible with the recipient," said Jayme Locke, MD, director of the UAB Comprehensive Transplant Institute. "We took blood from the decedent and lymphocytes from the pig and then screened in a flow cytometry crossmatch assay. We were looking for the presence of preformed antibodies in the recipient that react with antigens in the donor pig that would cause a hyperacute kidney rejection. The assay results gave us confidence that this would be a compatible transplant.

"This was the first time a prospective crossmatch has been validated between the two species. The development of this novel assay is critical for us to be able to use xenotransplantation widely for a living human population with end-stage kidney disease.

"We were also able to test whether a kidney from a pig could tolerate a human environment. This was essential because non-human primates, as well as pigs, don't have the same mean arterial pressure as an adult human. We didn't know if the vascular integrity in the human would hold up."

Once the kidney had been installed, the surgery team held their breath and watched. If a recipient's immune system recognizes a donor organ as foreign, hyperacute rejection will occur within minutes. As seconds ticked by, it became clear that the kidney would not be rejected.

"The kidney turned beautiful and pink," Locke said. "Within 23 minutes, it started making urine. It re-perfused normally just like a human allograft does. The vascular anastomoses stayed intact. We didn't have any major bleeding episodes, and the kidneys remained viable until the experiment was ended after 77 hours."

One kidney was more effective than the other in producing urine, and despite urine production, the blood serum level of creatinine, a waste product normally removed by healthy kidneys, did not drop. It's not yet clear what may have impacted this.

The transplantation with a brain-dead human is considered a pre-clinical model. "This human preclinical model is a way to evaluate the safety and feasibility of the pig-to-non-human primate model, without risk to a living human," said Locke, who is also coordinator of the UAB Kidney Chain, which is the nation's longest single-site kidney chain.

In order to pave the way for a future clinical trial, the study was conducted to meet the standards comparable to those that would apply to a Phase I human clinical trial, mirroring every step of a standard transplant between humans.

Locke is optimistic about what this means for the future. "This game-changing moment in the history of medicine represents a paradigm shift and a major milestone in the field of xenotransplantation. This is arguably the best solution to the organ shortage crisis," she said. "We have bridged critical knowledge gaps and obtained the safety and feasibility data necessary to begin a clinical trial in living humans with end-stage kidney failure disease."