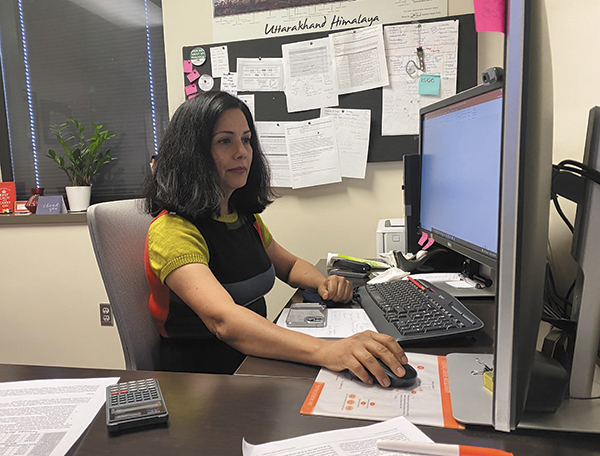 Nita A. Limdi works with pharmacogenomics to maximize the safety and efficacy of medicines.

While genetics provides opportunities to maximize the safety and efficacy of medicines, pharmacogenomics, which studies how a patient's DNA affects her response to drugs, aims to tailor medical treatment to each person or to a group of people. Pharmacogenomics can improve a patient's health by knowing ahead of time if a drug is likely to benefit her and is safe to take.

"Your response to medications depends on many things," says Nita Limdi, PharmD, PhD, professor in the UAB Department of Neurology and director of the pharmacogenomics program. "It is influenced by your age, weight, kidney function, liver function, diseases you have and drugs you may be taking. It is also influenced by your genetic makeup. To understand how genes affect responses to medications and the clinical applications, physicians can use the genes that are impactful to help decide which medications and what dose to give patients.

"Research teams are working together around the world to conduct studies to identify pharmacogenes. Because we need large data sets and many contributors, it became natural to collaborate with people in our institution, as well as throughout the United States and around the world."

In 2015, Limdi and her cohorts studied cardiology patients who received stents for a blockage in the heart. To prevent platelets from sticking together and causing stent thrombosis, patients were treated with two anti-platelet drugs, aspirin and clopidogrel (Plavix). "In order to work, clopidogrel needs to be converted to its active form with an enzyme," Limdi says. "If the patient has a loss-of-function variant in the gene that codes for the enzyme, it can't create enough active metabolite, and the platelets will stick to one another, which means the stent may thrombose."

In collaboration with other researchers, Limdi and her UAB team collected data at nine sites where 30 percent of patients have loss-of-function. "We discovered that if you keep these patients on clopidogrel, 15 out of 100 of them will have a heart attack, stent thrombosis, a stroke or will die within a year," she says. "However, if you switch these patients to an alternative antiplatelet, only seven will have a bad outcome. It drops from 15 to seven per 100 patients annually. That is a 50 percent risk reduction, which is huge."

Building on this work, Limdi and cohorts analyzed the cost effectiveness of genotype-guided therapy. The analysis included variability in medical costs from events that are borne by the payer, such as admissions, procedures, medications, clinical visits and genetic testing. "We found that the genotype-guided strategy is the most cost-effective under current circumstances," Limdi says. "That was powerful because this work brought the research full circle, from discovery of the gene that influences clopidogrel response, to evidence generation and synthesis of guidelines, to its application in clinical care to demonstrate efficacy and cost-effectiveness in the real world. The gene-outcome associations are similar across African, Caucasian, Asian and Hispanic groups.

"This process improves outcomes and is cost-effective. Genetic testing costs money, but it can tell you which patients need the more expensive drug instead of giving it randomly to 30 percent of the people. By preventing heart attacks and strokes, we are actually improving the cost-effectiveness ratio."

UAB will soon be launching a panel-based approach for pharmacogenomics. This will give providers genetic information that can be used to tailor medications for many conditions, such as cancer and depression. Information will also be available in the medical record to inform drug therapy in the future.

The Centers for Medicare & Medicaid Services broadly covers pharmacogenomics for all valid indications. "For example, if your physician prescribes a new anti-depressant, he can order a pharmacogenetic test to select which anti-depressant is most likely to work for you. Currently, about 10 to 15 percent of the drugs on the market have pharmacogenetic guidance," Limdi says. "As more research is done, more evidence will develop. There will be more guidelines for more medications that will allow precision medicine for multiple conditions for the individual patient."