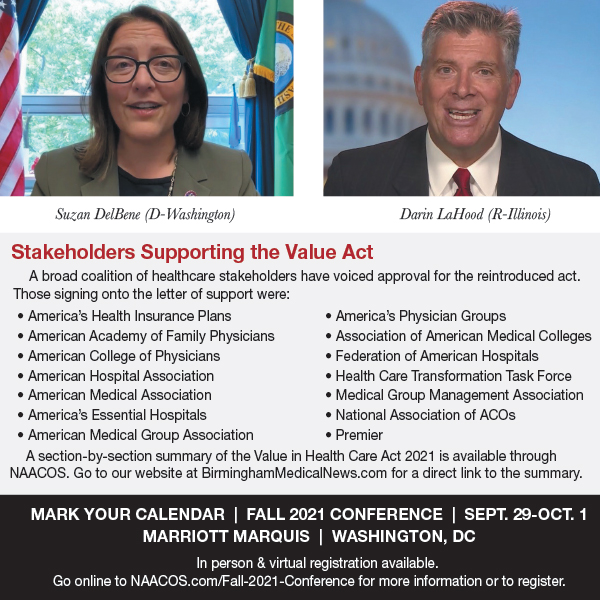 In July, major healthcare organizations signed a letter of support for the recent reintroduction of a bipartisan bill to support accountable care organizations (ACOs) and other alternative payment models (APMs), while also addressing an unintended consequence of the ACO formulary, known as the 'rural glitch,' that punishes rural hospitals even when they achieve savings.

The bill comes as participation rates have declined over the past few years. There were 477 ACOs participating in the Medicare Shared Savings Program at the beginning of 2021, compared to a high of 561 in 2018. Since launching in 2012, ACOs had seen steady growth up until late 2018 when the Trump-era 'Pathways to Success' policies took effect.

"Since 2012, Medicare ACOs have saved $8.5 billion in gross savings and $2.5 billion in net savings," Allison Brennan, vice president with the National Association of ACOs (NAACOS), said during a virtual briefing on The Value Act. "Unfortunately, we have seen a decline in the number of ACOs, providers and beneficiaries covered. The policies enacted in late 2018 and early 2019 that sped up the risk profile and cut the share of savings available to ACOs seem to have impacted participation. On balance, I think it has had the effect of chilling new ACO growth.

"The reintroduced bipartisan bill once again incentivizes ACO growth as participants would get to keep more of the savings they help generate. It also gives ACOs three years before they must take on risk and provides some upfront funding for those who need help in setting up their ACO."

Sponsor Rep. DelBene cited the importance of finding cost savings while improving care coordination and quality. "Our healthcare system should be as healthy as we want our patients to be," she sais. "The need for this level of care was made clear by the pandemic. Across our health system, we should be incentivizing care coordination and quality. ACOs show the ability to do that."

The Value Act and a separate bill introduced in the U.S. Senate last fall - The Rural ACO Improvement Act (S.2648) and companion bill in the House (H.R.5212) - focus on making financial targets more equitable in rural areas. Introduced by Sens. Catherine Cortez Masto (D-Nevada) and Pat Roberts (R-Kansas), the bill changes the benchmark calculation so rural ACOs aren't punished for their location in areas that are more sparsely populated.

In 2017, the Centers for Medicare and Medicaid Services began aggregating spending from other providers in the ACO region to calculate an ACO's benchmark. The adjustment was created to reward ACOs with costs below the regional mark and includes an ACO's own beneficiaries in the calculation. In rural areas, however, ACOs often either had no peers for comparison or were penalized by making up the bulk of the market, thus being compared to themselves. With a lower spending benchmark, rural ACOs often receive smaller savings bonuses compared to their urban counterparts where there are more providers and patients in the pool.

To address the unfair adjustment, both bills look to remove an ACO's assigned patients from the regional comparison to get a truer picture of whether the ACO is creating cost savings compared to other providers in the area. While all ACOs will benefit from the change, the issue is known as the rural glitch because rural ACO participants have been negatively impacted the most by the current spending target methodology.

"When ACOs lower their spending, Medicare spending for the entire region also falls," NAACOS President Clif Gaus, ScD said. "These bills correct an unintended flaw that penalizes those who make up the bulk of their market. Our health system needs to find ways to incentivize the adoption of alternative payment models like ACOs."

Value Act sponsor Rep. LaHood, who represents a mostly rural area, said supporting value-based efforts in healthcare is critical to ensuring access and coordination. "As we continue the transition to value-based care, there are always challenges to address and ways to improve. The Value in Health Care Act is a common-sense proposal to do that."