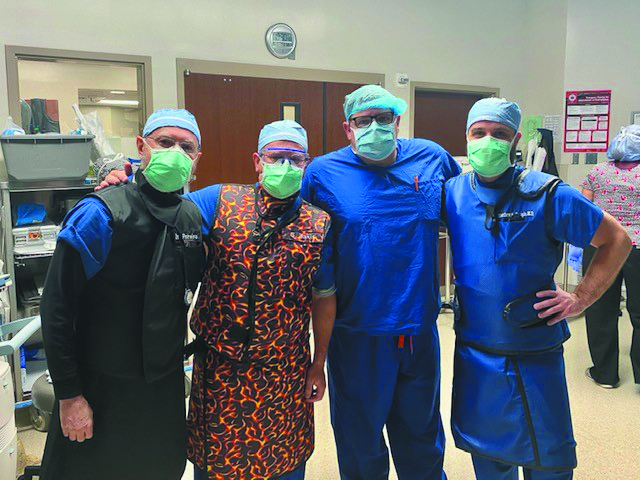 The team that did the first Birmingham LAMPOON surgery.

When the structural interventional cardiologists at Cardiovascular Associates (CVA) had to send patients to Emory for a specialized mitral valve surgery known as LAMPOON (laceration of the anterior mitral leaflet to prevalent outflow obstruction), they decided it was time to train in the procedure themselves, so they can offer cutting edge care to their patients locally. After training, they completed the first Birmingham LAMPOON surgery in May.

LAMPOON prevents the obstruction of blood flow in the left ventricular outflow tract (LVOT) during transcatheter mitral valve replacement (TMVR). "It's an adjunct incremental step that allows us to offer TMVR to more patients," said Matthew Sample, MD, structural interventional cardiologist. "Over the past decade, we've had an explosion in our ability to do percutaneous valve surgeries, valve replacements and valve repairs."

"One of the things we've done over the past five to 10 years is use an aortic valve prosthesis placed in the mitral valve position through the leg," said Stephen Bakir, MD, structural interventional cardiologist. "In some of those patients, when we place a new mitral valve inside the old, the leaflet gets in the way and causes outflow obstruction. The only way to fix that is to cut that piece of mitral valve out. When the surgeon has the chest open, it's nothing to cut that piece out. But LAMPOON allows us to put a valve in through the leg, and using electrosurgery, which is a guidewire that's electrified, we make a precision cut in the leaflet of the mitral valve, which opens it and allows the new valve to go in without obstructing the outflow to the heart."

Since an obstruction to outflow is immediately fatal during transcatheter surgery, this procedure opens the door for many patients who are not able to withstand open heart surgery and are at risk obstruction during TMVR.

The procedure requires a talented multi-program team, and the team completing the procedure in May was no exception. In addition to the two structural interventional cardiologists, the team included a structural cardiac imager, Luiz Pinheiro, MD and a cardiac thoracic surgeon, Will McAlexander MD.

"Dr. Pinheiro gave us the eyes and ears to guide us through this with 3-D echo," Bakir said. "And Dr. McAlexander made modifications on the current iteration of the heart valve prosthesis."

"A lot goes into this," Sample said. "It's very technical and challenging. This is not a standardized procedure at this point. It is continually being modified. The procedure we did was the most recent iteration, the tip-to-base LAMPOON, otherwise known as reverse LAMPOON."

The procedure is even considered controversial, but Sample and Bakir are confident it will prove to be a viable option for those patients who are not candidates for other courses of treatment. "It's a niche for patients who have very few options and would not otherwise survive surgery for percutaneous mitral valve," Bakir said. "If all goes well, they can walk out the next day with a Band-Aid on their leg."

In fact, they see the potential for a new field of medicine. "The collection of these techniques, and there's more than just LAMPOON, is called cardiac electrosurgery," Sample said. "It involves using a very small electrified wire to cut structures in the heart. If this is as effective as developers think, it will create an entirely new field within interventional cardiology. That is the lofty goal. It will have to be borne out in the data, but I think it's going to work."

Sample and Bakir traveled to Emory to be trained in LAMPOON. "We contacted the developer and went to observe the procedure on a patient we referred to them. When we got there, they were doing another on the same day, so we were able to see two," Sample said.

"This is not something you want to attempt without knowing how to do it step by step," Bakir said. "There are other applications for this electrosurgery procedure that we have already incorporated into our practice."

Once they had trained for the procedure, Sample and Bakir felt confident proposing and using LAMPOON when a patient presented who could benefit from it. The operation took place in early May. It went well, and they sent the patient home two days later with a Band-Aid on his leg, as expected. "We kept him two days out of an abundance of caution, but he felt well enough to leave the next day," Sample said.

A follow up appointment will be needed at two months, and the doctors expect to check his echocardiogram annually in the future, but he will be under no activity restrictions.