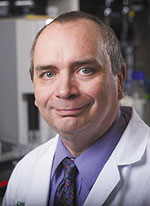 On June 7th, the FDA approved Biogen's Aduhelm (aducanumab), which is the first new drug for Alzheimer's disease in 18 years. This caused some controversy among researchers, some of whom felt that clinical trial data did not conclusively demonstrate that Aduhelm could slow cognitive decline. In order to get a better understanding of the situation, the Birmingham Medical News sat in on a meeting with David Geldmacher, MD who serves as Director of the UAB Division of Memory Disorders and Behavioral Neurology and who has been involved with studies of aducanumab for five years.

David Geldmacher, MD: This is the first drug to be approved that actually modifies the underlying process of Alzheimer's disease, the biological process that leads to the death of brain cells. Prior treatments treat the symptoms of the disease. They help the brain cells work better, but this is the first treatment that is believed to slow down the progression and remove some of the abnormal chemical accumulations in the brain that occur in Alzheimer's.

The process was not without controversy. There have been several mixed votes at the FDA between external advisors, internal advisors and the final approving authorities. But for our patients with mild cognitive impairment due to Alzheimer's and dementia due to Alzheimer's, this is an important day. There are still many unanswered questions about how we will apply this medication to our population.

In the clinical trials, we needed to demonstrate that the amyloid protein that this drug targets was building up in the brain and that it was present and associated with the symptoms of memory loss and related dysfunction. Our clinical world in Alzheimer's disease has not been focused on the specific question as to whether the amyloid protein is building up in the brain or not.

We will need to expand our diagnostic and therapeutic capacities to be able to deliver this drug to the appropriate population.

The FDA has acknowledged that there is debate regarding the efficacy of this drug. Can you explain what that concern is about?

The FDA typically requires two clinical trials of a drug to demonstrate its reliability and effectiveness. In this case, Biogen, terminated those two trials early with the belief that they were not seeing effectiveness. However, after those terminations, they reanalyzed the data, looking specifically at people who were receiving the higher doses in each of the two trials and that combined data is what they presented to the FDA. That showed efficacy at the level of slowing the course of the illness - about 20 percent or so. But this was not the original analysis that the FDA agreed to. So there are concerns from the statistics as to whether this was cherry picking.

Why is the post-approval study necessary since the FDA has already cleared it?

Aducanumab is approved under a special authority that is used for drugs that treat a population that has high need and is of great importance. Alzheimer's disease certainly fits that profile. They acknowledge that there may be limited effectiveness in support of this kind of approval and of the public health need. So the second study is being undertaken to demonstrate ongoing effectiveness in a sample that is planned.

We have a similar story from the world of breast cancer. A number of years ago, Avastin was a released under the conditional approval, but subsequent studies demonstrated that it was not effective for the target population with breast cancer and so the original approval was withdrawn for that.

There are some risks that that could happen here. This agent is not the first antibody drug that targets the amyloid peptide. I have been involved in studies with these going back to 2008 and a number of them showed promising preliminary results but, when put into a larger pool of participants, the effectiveness was not seen and those trials were terminated. That was actually what we thought was happening with aducanumab when Biogen discontinued the studies early.

Can you describe the process going forward?

One of the important steps will be approval by Medicare and the various payers of this medication. As an antibody type drug, we anticipate that it will be expensive, probably $30,000 or more per year, which is a substantial investment for payers. We need to demonstrate that the people receiving this medication will actually have the targeted amyloid protein building up in their brain. That will require PET scans or spinal taps, both of which are limited resources. Many patients may not wish to undergo that procedure. So getting qualified for this medicine will be one step. Finding out how it gets paid is another.

I think there will be a number of test cases; individuals who put themselves forward to see if their insurer will pay for it. So there will be a gradual uptake and gradual expansion of the resources to provide care.

The other important feature here is the target population. This drug is not for everyone with dementia. It's for the people who have Alzheimer's causing their dementia and it's targeting people with the mild stage of dementia who are largely still independent. It would also target people with cognitive impairment due to memory loss from Alzheimer's, but no losses in daily function.

Prior Studies have demonstrated that this drug does not benefit individuals with advanced stages of dementia. It does not restore brain cells to health. It does not it does not restore the person's memory or cognition to the pre-illness state. It slows the progression, and even that is questionable due to the statistical analysis. The best way to phrase it is that it may slow progression.

You talk about a decline in the amount of amyloid in the brain as a consequence of this drug. Can you explain that in simple terms?

We believe that the process of Alzheimer's disease is triggered years before the first symptoms emerge and the earliest marker we can find of the disease process is the abnormal accumulation of a protein in the brain called the amyloid peptide. This is something that Dr Alzheimer himself discovered this in autopsy brains back in 1906. That is the earliest stage which eventually leads to a dysfunction of the brain cells and their death, resulting in the loss of memory and related cognitive functions. So we believe that by targeting the amyloid early before a lot of that downstream damage is done, we can limit the progression. Once the brain cell is lost - once the amyloid has triggered that toxic pathway - there are no current therapies that would restore those brain cells to health or to life if they have died.

What are your hopes for the future based on what this drug may or may not do?

I've been involved in drug testing for Alzheimer's disease for 28 years, and in the early years, when new medicines were approved, clinicians thought we had the complete answer and that no more research would be necessary. That obviously wasn't true and I think it will be the same with this medication. It will provide important benefits for some people but it leaves the door open for us to find better treatments. That's the focus of our ongoing research. This is not a door closing on the research process. This is a door opening, as to looking at new ways and added ways of supplementing this medication's effectiveness in maintaining brain cell health and preventing the disability and the family strife and challenges associated with Alzheimer's disease.