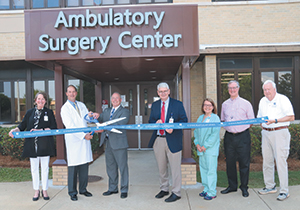 EAMC-Lanier ASC held a ribbon cutting ceremony in May.

EAMC-Lanier Ambulatory Surgery Center (ASC), which opened in late April, has received accreditation from the American Association of Ambulatory Health Care (AAAHC), which means EAMC-Lanier ASC has met nationally recognized standards for the provision of quality health care set by AAAHC. More than 6,100 ambulatory healthcare organizations across the USA have been accredited by AAAHC.

The new center, which is a joint venture between EAMC and five physician shareholders, is the first ambulatory surgery center to open in east central Alabama. The 17,880 square-foot facility contains four operating rooms and one procedure room.

The Alabama Department of Public Health has awarded the University of Alabama at Birmingham nearly $2 million to support the establishment of the Alabama Regional Center for Infection Prevention and Control (ARC IPC).