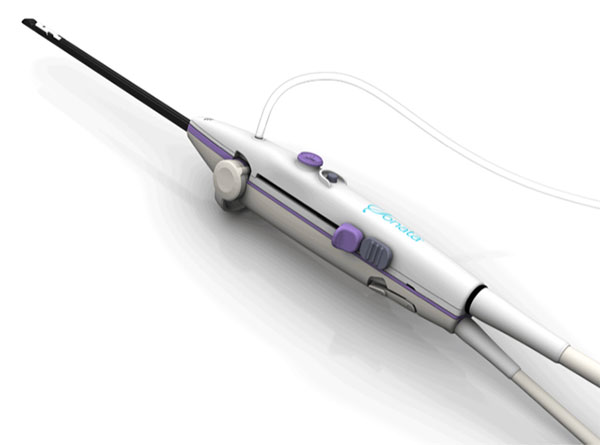 Although symptomatic fibroids are usually benign, most women would be quick to say it doesn't mean these tumors aren't troublesome.

In the United States, symptomatic uterine fibroids are the most common reason for hysterectomy, which remains the only definitive cure for the myomas. Since prevalence of problematic uterine fibroids (UFs) are most common during reproductive years, the cure presents an unacceptable trade-off for women who hope to bear a child in the future. As a result, many women live with painful symptoms for years.

While not a cure, there are an increasing array of alternatives to manage fibroids for those trying to preserve fertility. Medication management, myomectomy, radiofrequency ablation, uterine artery embolization and MRI-guided focused ultrasound have all been shown to offer some relief with varying degrees of invasiveness, efficacy, longevity and patient satisfaction.

One of the newest options for women is the Sonata® System from Gynesonics®, a women's health company focused on minimally-invasive solutions for treating symptomatic uterine fibroids. Gynesonics® first received Food & Drug Administration 510(k) approval to market the Sonata System for Transcervical Fibroid Ablation (TFA) in August 2018 and received clearance for their next generation system last year. The system can be used to treat most fibroid types including submucous, intramural, transmural and subserous.

"Women deserve choices when it comes to the management of fibroids," said David Toub, MD, MBA, FACOG, medical director of Gynesonics. "There used to be only two options - hysterectomy, which was curative but precludes fertility, and myomectomy, which removes fibroids but preserves the uterus."

"According to the literature, women typically wait, on average, 3.6 years and a good percentage wait five years to seek treatment to relieve symptomatic fibroids," Toub said. "The reason is they don't want that disruption to their life.

"In contrast, Transcervical fibroid ablation heats the fibroid by going in through the cervix, so there are no incisions, and it conserves the uterus. The Sonata System combines intrauterine ultrasound guidance for advanced visualization with targeted radiofrequency ablation to treat the fibroids. Because it's inside the uterus, it's very high resolution. We can see details that we don't always see on transvaginal ultrasound or MRI."

It is performed as an outpatient procedure so women don't have to undergo general anesthesia, and about half the cases in a large study used sedation. "The average length of stay in our study was about two-and-a-half hours and that includes the procedure," Toub said. "The majority of women returned to normal activity within 2.2 days on average, with many able to do so within one day."

Although a few other radiofrequency ablation systems exist, they have typically required adaptive devices. "Because the ultrasound is part of the device itself, you don't have to manipulate multiple tools. There is just one device and one screen," Toub said. "It also doesn't require advanced ultrasound skills. In fact, most physicians who are using the system are not highly specialized in ultrasound technologies. Yet, it's proven to be very effective and safe in their hands."

Sonata includes the SMART Guide - Setting Margins of Ablation in Real Time. The Gynesonics literature explains this technology displays a real-time graphic overlay on the live ultrasound image to determine the size and location of the ablation zone, safety borders and duration of the radiofrequency energy delivered.

In April, the company announced publication of a clinical study analysis assessing effectiveness of the system. The peer-reviewed article, Transcervical Fibroid Ablation with Sonata System for Treatment of Submucous and Large Uterine Fibroids, appeared in the International Journal of Gynecology and Obstetrics. The analysis focused on a subgroup of patients with those specific types of tumors who had been enrolled in two previously published multicenter clinical trials -FAST-EU, primarily in Europe, and SONATA, primarily in U.S.-based centers.

Among 197 women who had been treated for 534 fibroids, 86 percent of patients with only submucous fibroids and 81 percent with large fibroids (>5 cm) had bleeding reduction at three months post-ablation with sustained improvements over 12 months. Fibroid mapping with MRI in the FAST-EU trial showed an average volume reduction of 68 percent. Toub noted the volume reduction compares favorably to other uterus-sparing technologies with embolization typically seeing reduction of 50 percent, pharmaceuticals achieving 40 to 50 percent reduction and focused ultrasound in the range of 15 to 30 percent reduction.

Furthermore, the rate of surgical reintervention among the women with only submucous fibroids was 3.7 percent in FAST-EU and 0.7 percent in SONATA at the one-year mark. The reintervention rate on the SONATA trial at the two-year mark was five percent and at three years was 8.2 percent. "It showed great results through 36 months," Toub said of the durability of the treatment protocol. It isn't surprising to see the need for additional intervention in some candidates because women who have many fibroids at baseline have a proclivity to form more fibroids. The patient response to this treatment has been positive with 94 percent of patients reporting satisfaction after three years.

With positive durability and safety outcomes, along with minimal procedure and recovery time, Toub said Gynesonics believes they are offering women and physicians a new option to deal with a condition that is too often minimized. For women who suffer through painful periods, miss work days and skip social activities, UFs are more than just a nuisance.

"By treating the fibroids successfully, you can have such a positive impact in their life," Toub said.

How Big a Problem Are Fibroids?

Epidemiologists have found it tricky to nail down exact incidence and prevalence rates of uterine fibroids (UFs). Since many are small and/or asymptomatic, these muscular tumors in the wall of the womb often aren't diagnosed or reported.

However, from the studies that exist, general consensus puts incidence rates at upward of 70 percent for developing one or more fibroid tumors over a lifetime. The Eunice Kennedy Shriver National Institute of Child Health and Human Development (NICHD) cites fibroids as "the most common non-cancerous tumors in women of childbearing age." An estimated 25 percent of women of in this group have symptomatic tumors that moderately or greatly impact quality of life, and symptomatic fibroids are the most frequent reason for hysterectomy in the United States.

Risk profiles also are not clearly understood, but age is a key factor with UFs becoming more common as a woman ages up through menopause, after which time tumors begin to shrink. Race also plays a major role with black women having a significantly higher risk of developing fibroids and of having symptoms. Family history, obesity and eating habits have also been linked to UFs. Women who consume a lot of green vegetables seem to be afforded some protection from developing fibroids, while eating a lot of red meat has been linked to a higher risk of tumor development.

Last year, researchers at Michigan State University College of Human Medicine, Van Andel Institute and Spectrum Health uncovered new information on genes associated with fibroid tumors. In releasing their research findings, the group stated one of the genes they discovered, HOXA13, which is associated with uterine fibroids, "appeared to correlate with a transformation of cells in the muscle of the uterus into cells more typically found in the cervix when activated -- a process called 'homeotic transformation.'" The study, funded by the National Institutes of Health and published in Cell Reports, could ultimately lead to new therapeutic targets.

Although many women with UFs have no symptoms, those who do often find the symptoms take a toll on quality of life. The most common issues include heavy menstrual bleeding (sometimes to the point of anemia), menstrual periods a week or more in length, enlargement of the lower abdomen, frequent urination, pelvic pain or pressure, constipation, pain during sex, and pain in the legs or back. Depending on the size and positioning of the fibroid tumors, women might also have difficulty in achieving pregnancy. They also face increased potential for complications during pregnancy, as well as a higher risk for requiring a cesarean delivery.