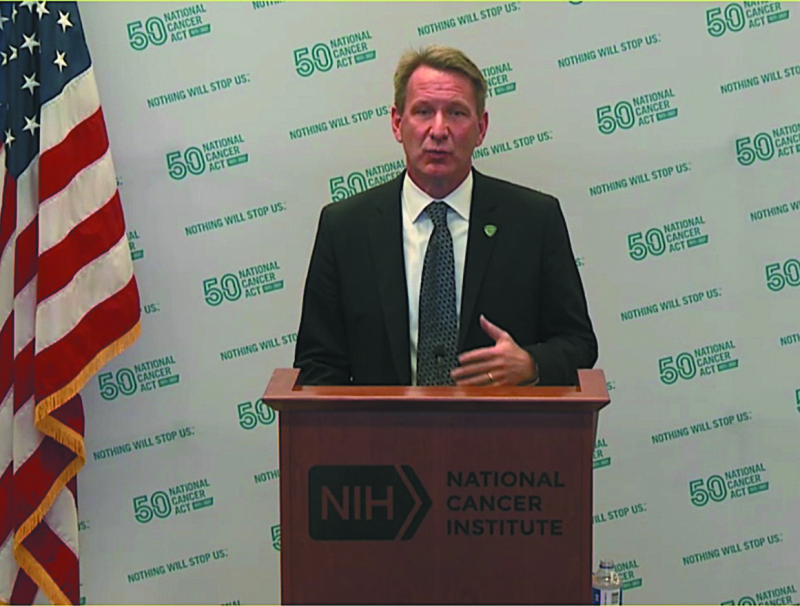 In April, National Cancer Institute Director Norman E. "Ned" Sharpless, MD, FAACR, addressed the virtual attendees of the American Association for Cancer Research Annual Meeting to provide an update on where we stand in the ongoing fight against cancer.

"We're living in dizzying and challenging times, but we're still making remarkable progress in cancer research," Sharpless said. "We will look back at this era as the golden age of cancer research."

There have been more than 240 drugs, biologics and devices approved by the Food & Drug Administration for cancer indications since 2017. Sharpless said that this remarkable productivity is a testament to the work of basic and translational researchers in academic, government and private industry.

He touted the Human Papillomavirus (HPV) vaccine's safety and efficacy as an example of success. A recent study of nearly 1.7 million women in Sweden found that girls vaccinated before age 17 had a nearly 90 percent reduction in cervical cancer incidence over an 11 year period (2006-17) compared to the incidence in women who had not been vaccinated.

"The key to more of these success stories is to ensure stable funding for research. Investigator-initiated science is how we make progress for our patients," Sharpless said.

He pointed to the Cancer Moonshot, which started in 2017, as an accelerant that has helped fuel recent discoveries and information-sharing. Authorized at $1.8 billion spread over seven years, the program lapses in 2023. Launched while he was vice president, the project is deeply personal to President Joe Biden and First Lady Jill Biden, who lost son Beau to cancer in 2015. Sharpless noted that Vice President Kamala Harris also has a personal connection as the daughter of a cancer researcher who died from the disease.

Not surprisingly, President Biden's proposed budget for FY 2022, which was released on April 9, includes significant funding increases to address cancer. The budget suggests a total increase of $9.3 billion in funding to the National Institutes of Health. Additionally, the proposed budget includes $6.5 billion in funding for ARPA-H. Modeled on the military's Defense Advanced Research Projects Agency (DARPA), this new Advanced Research Projects Agency - Health would look to speed innovation by investing in new projects and would be housed within the NIH.

"Congress controls the power of the purse, and the president's budget is just a suggestion," Sharpless said. "But while funding remains unclear, there is strong bipartisan support for cancer research. Everyone wants this effort to succeed."

The president has stated his goal is to end cancer as we know it. "I don't us expect to eradicate all cancer deaths," Sharpless said. "However, I believe it's possible to dramatically impact the tragedy of cancer by developing new treatments, finding cures for pediatric cancers and helping people live longer and more fully, even with a cancer diagnosis.

To meet the goal of cutting mortality in half by 2026 would require about a four percent decrease per year going forward, which has never been achieved to date. However, Sharpless said after historically reducing mortality by about 1.55 percent per year, the two most recent years for which data is available were trending in the right direction. In 2017, the country saw a 2.2 percent decline in cancer mortality and a 2.4 percent decline in 2018.

"I think we can get there by 2026," he said. "However, to achieve that goal will require focused efforts including developing large national trials aimed at early detection of cancer in healthy adults through blood-based screening, allocating resources to clinical trials focused on underserved populations and communities, and an increased commitment to accelerating drug discovery using new platforms and machine learning."

While the development of the COVID-19 vaccine showcased the ability to rapidly create highly effective measures to combat disease by harnessing information and technology, Sharpless said the pandemic also sharply showcased glaring health inequities in our country.

"Underlying all this work is a need for health equity," he said. "We can't leave huge portions of the population behind and expect to make meaningful progress."