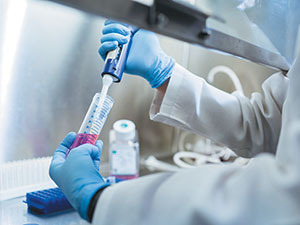 Research funding to UAB from the National Institutes of Health exceeded $325 million in 2020. The university received $325,573,502, which placed UAB 27th in the list of universities receiving funding from the NIH. Among public universities, UAB ranked 12th.

The largest amount of funding, $269,911,974, went to investigators in the School of Medicine. This was an increase of more than $13 million over 2019, good for 24th overall among the nation's medical school.

"This is the second year in a row that UAB research funding from NIH has been over $300 million, reaffirming UAB's place as a leading academic research institution," said Chris Brown, PhD, vice president for Research at UAB. "In addition to serving as a major economic driver for Birmingham and Alabama, this funding leads to discoveries that are responsible for dramatic improvements in the health of citizens of Alabama, the United States and the world."

Within the School of Medicine, five departments were in the top 10 in research funding. The Department of Dermatology was second, with more than $8.2 million. Cell, Developmental and Integrative Biology was sixth, with nearly $17 million. Biomedical Engineering landed in seventh place, with $4.7 million, while Microbiology ranked eighth, with $21.3 million. Obstetrics and Gynecology ranked 10th, with $6.4 million.

Another seven departments landed in the top 20 in the nation, including Ophthalmology and Visual Sciences, Pediatrics, Urology, Neurology, Anesthesiology, Neurosurgery, and Physical Medicine and Rehabilitation.

Three departments finished at 21st in their respective fields: Internal Medicine, Genetics, and Pathology. The Departments of Neurobiology and Radiation Oncology finished in the top 30.

The Departments of Psychiatry and Behavioral Neurobiology, Otolaryngology, and Biochemistry and Molecular Genetics all ranked within the top 50 in their fields.