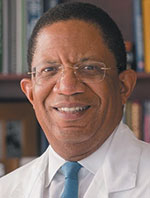 Founded in 1880, the American Surgical Association is the nation's oldest and most prestigious surgical organization. Vickers is the third African American president in the association's history, and the second surgeon from UAB to serve as president.

Kirby Bland, MD, a past president of the ASA, said "this election represents the highest honor in the surgical profession of the United States."

A world-renowned surgeon, pancreatic cancer researcher and pioneer in health disparities research, Vickers is a member of the National Academy of Medicine and the Johns Hopkins Society of Scholars. He has served as president of the Society for Surgery of the Alimentary Tract and the Southern Surgical Association.

Vickers earned baccalaureate and medical degrees from Johns Hopkins University and completed surgical training there, including a chief residency and surgical oncology fellowship. He completed two postgraduate research fellowships with the National Institutes of Health and training at John Radcliffe Hospital of Oxford University, England.

"One aspect of my career that I value most is caring for patients," he said. "This recognition symbolizes my commitment to excellent patient care. To be honored by my colleagues this way is as exciting as any accomplishment in my academic career to date."