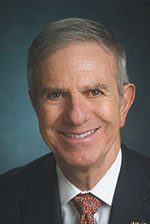 Selwyn Vickers, MD, senior vice president and dean of the UAB School of Medicine, will succeed Ferniany as CEO of UABHS and the Alliance while continuing in his role of dean of the medical school.

During Ferniany's tenure as CEO, the UABHS has grown from five hospitals to 11, with revenues expanding from $2.3 billion in 2008 to more than $5.8 billion today. Ferniany says among the most gratifying accomplishments of his time at UAB is the engagement by the Health System to improve health care for Alabamians.

"To that end, UAB is actively engaged with the Alabama Hospital Association, along with many other affiliations with Alabama health care facilities, to expand Medicaid and improve Medicaid funding, develop an extensive telehealth system, and operate the new Alabama Rural Hospital Resource Center," he said.

Cooperative agreements established with many of the leading health care facilities in the state, including Mobile Infirmary Health and Northeast Regional Medical Center in Anniston, along with the forming of the Alabama Health Alliance with Huntsville Hospital, have contributed to the improvement in health care in Alabama. UABHS now manages four rural hospitals in Camden, Demopolis, Greenville and Alexander City, providing cost-savings that help these facilities continue to offer medical care in their communities.

UAB affiliate Medical West Hospital in Bessemer is preparing to start construction on a new facility that will improve health care for residents in the south and southwestern parts of Jefferson County.

"Dr. Ferniany is to be credited for his unwavering support of the mission of academic medicine," Vickers said. "The Academic Enrichment Fund developed under his leadership aligned the Health System with the academic departments, enhancing the school's ability to retain and recruit top physicians and scientists."

"Quality has always been a focal point for Dr. Ferniany," Reid Jones, CEO of UAB Medicine, said. "He is tenacious about producing better outcomes. He cares about his employees, and he cares about the patients.

"It has been my honor to serve UAB Health System's patients, physicians and employees, and the people of Alabama," Ferniany said. "While it is bittersweet to announce my retirement, I do so with pride in all we have accomplished together for those we serve and knowing the future of continued success is in good hands."