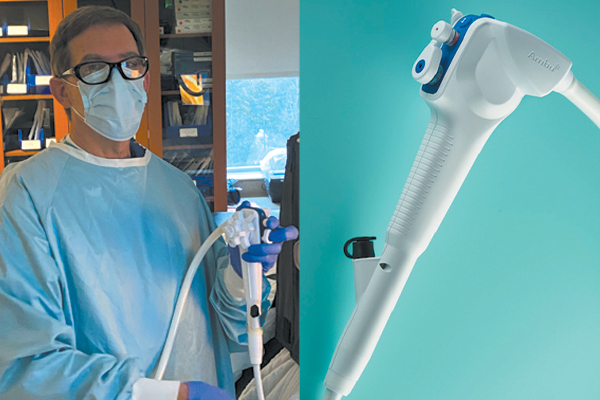 Sigman in surgery with Single-Use Duodenoscope. The Ambu aScope Duodeno

The invention of the flexible fiberoptic endoscope by Basil Hirschowitz, MD, who founded UAB's Division of Gastroenterology and Hepatology, was one of the great leaps forward in modern medicine. Now one of his former office mates is helping to take the technology a step farther as the first Alabama gastroenterologist to evaluate and use in clinical practice a new, single-use version of an Ambu duodenoscope, the aScope Duodeno.

A great deal of time, effort and expense go into cleaning and sanitizing conventional endoscopes to prepare them for the next procedure. The difficulty in sanitizing duodenoscopes used in endoscopic retrograde cholangiopancreatography (ERCP) procedures is that the tip design doesn't lend itself to cleaning.

"The tip is turned to access the gall bladder and pancreas," gastroenterologist Kenneth Sigman, MD, of Gastrohealth, said. "That makes it harder to clean thoroughly so that it's absolutely sterile. In spite of diligent cleaning and sanitizing efforts, in the past it has been linked to outbreaks of infection. To eliminate the possibility of cross contamination, Ambu developed a single use duedonoscope."

Due to Sigman's academic background in his years at UAB and his extensive experience in performing ERCP procedures, Ambu contacted him to be among the first physicians in the country to evaluate their new single use duodenscope.

After the FDA approved the technology and granted it Breakthrough Device Designation, Sigman began using it to perform procedures for his Gastro Health patients.

"I started using the device in procedures at Grandview Medical Center several weeks ago," he said. "The initial touch was a bit different, but more alike than different when you compare it to traditional scopes. You quickly get the feel for it. After using the aScope Duodeno in around a dozen cases the first month, my reaction has been quite positive. The visual definition is excellent. It allows me to examine and biopsy organs, remove stones, place stents and perform all the same interventions as traditional scopes. There have been no infections after any of these procedures."

The single use device has also been well received by patients.

"Since the pandemic began, patients have been reluctant to schedule procedures or even come to a medical office," Sigman said. "They seem to feel more comfortable when I tell them we will have a single use duodenoscope that is sterile and fresh out of the package. They like knowing they will be the first person using it."

Although sterilizing endoscopes for their next use has always been a high priority, studies have shown that even the best efforts aren't always effective. One such study found that up to 15 percent of duodenoscopes may still be contaminated after reprocessing.

Eliminating that doubt is one of the strongest benefits of the new technology. However, it is also proving to be cost effective.

"With traditional endoscopes, in addition to the initial capital cost of the purchase, which can be substantial, there are also monthly service contracts to pay, and the cost of staff time, supplies and equipment used in cleaning and disinfecting," Sigman said. "If repairs are needed, that's another expense, along with the cost of revenue lost to delays.

"Traditional scopes have to be individually hand cleaned after each use and then soaked in expensive solutions and run through a specialized washer. That takes up valuable space for the processing and more space for storing to keep everything sterile until the next use. With the single use scopes, you simply open the sealed, sterile package and dispose of it when you're finished."

Sigman often performs ERCP procedures when symptoms suggest blockages, stones or strictures and conditions ranging from pancreatitis to cancer. In the next few weeks he is also scheduled to do a trial use of the Exalt single use duodenoscope from Boston Scientific.

"Over the past few years, single use scopes have been available for pulmonary and ENT procedures," he said. "It's good to see this advance coming to gastroenterology. In Europe, disposable scopes are already being used in colonoscopies and other gastroenterology procedures. In the future, they should be available here.

"Eventually, if all the endoscopic procedures we typically do in the lab could be done with single use scopes, the valuable space that's being taken up by the cleaning process could be put to more productive use. That should help to reduce health care costs for everyone."