Vulcan Imaging Gives Around the Globe 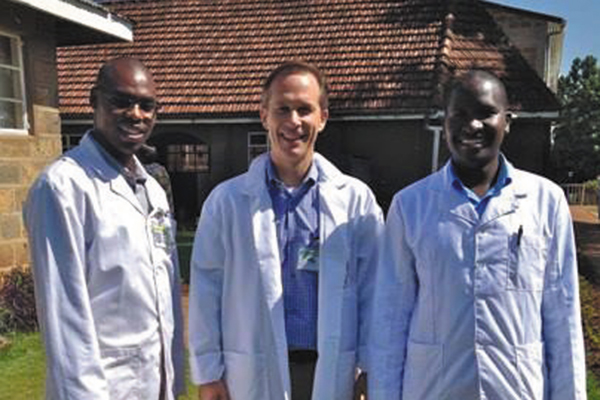 "They had a need," says Eric Blackman, CEO at Vulcan Imaging Associates (VIA). That's all it took for the 30 radiologists at the medical group to agree to donate their time to read hundreds of x-rays per month from Christ Health Center, a local nonprofit medical facility. That was three-plus years ago.

Since then, the Center's needs have grown, and so has VIA's commitment to them. "We're their only source for interpreting all their work, including ultrasounds, which are a new service," Blackman says. At their four Birmingham locations, Christ Health Center served 21,500 patients last year from the area's underserved population, offering primary care services from their staff of 44 providers, plus pharmacists, counselors and a dentist.

Blackman estimates VIA radiologists read 20 to 50 ultrasounds a month now in addition to the x-rays, but he expects that number to rise rapidly. "And any one of our radiologists can read them when they come in. This is a groupwide effort." VIA even provides the clinic with file storage through their partnership with FINAO Solutions in Huntsville.

The growing availability of ultrasound machines and CT scanners has meant impoverished clinics around the world may gain access to one. The problem becomes finding someone trained to use the machines and interpret the images. A nonprofit called Hope Imaging fills that gap. "They identify places all over the world and send sonographers--which are ultrasound techs--or radiologists to teach them how to use it," says Shane Wear, MD, a radiologist at VIA.

He started working with Hope in 2015. "You go for one week at a time," Wear says. "But because there is only so much you can teach someone in a week, you can come back in six months."

Wear's two trips were to Haiti. The second trip was to the same outlying clinic. "It was more fun because I had built relationships with some of them already," Wear says, adding that unlike other charity work, these missions are more finite. "Our goal is to go there and to work ourselves out of a job, so they're good enough they don't need us anymore."

During his first trip, a woman arrived with abdominal pain. Because of the scans, they discovered an ectopic pregnancy, where the egg implants outside the uterus. Though rare, the condition is life-threatening to women. "We got her onto a bus and into a hospital for surgery. Had she not been diagnosed at that time, there's a good chance she would have died at some point in her pregnancy," Wear says. "That made me see that we are making a difference."

Back in Birmingham, The Save A Life Ministry devotes mission work to helping pregnant woman and has the same need for training personnel to do ultrasounds. So every other week, Dean Thornton, MD, another radiologist at VIA, teaches nurses how to perform and read ultrasounds. "I've trained a bunch of nurses so that they can offer that service pretty much whenever their doors are open there," he says. "And I get to do the ultrasounds, which I enjoy."

The clinic provides help to women who face an unexpected pregnancy and may feel financially or socially ill equipped to raise a child. Save A Life offers a host of financial and social resources to help them carry forth with their pregnancy and have successful families.

"The ultrasound is a very powerful tool. Seeing the baby on the ultrasound, wriggling and moving, makes it real for the mom," Thornton says, who's been volunteering since 2007. "They go from despair to hope, as they are able to get all the resources they need. Then, as new mothers, they'll often bring their newborns back to show us and they will tell us how much they love their child. It's very fulfilling to be small part of that process."

Thornton also works with World Medical Mission, an arm of Samaritan's Purse, which has hospitals all over the world. In 2014, he traveled to southwestern Kenya to volunteer at Tenwek Hospital a 300-bed facility that had a new CT scanner. "I fell in love with the place and the program," Thornton says, who runs every day, including while he was in Africa for those two weeks. One of his fondest memories is of a group of young, smiling children who joined his run as he came down their road, some holding his hand as they jogged together.

Back home, he continues his support by spending a week every other month reading two to four scans each night. "Almost every case there is weird," Thornton says. "Tropical diseases, terrible car wrecks, and the biggest tumors you have ever seen. Last week, I saw a woman who had been attacked with a machete. It's a different world."

Wear says the array of volunteer opportunities for radiologists surprised him. "It's been great to see that our specialty can participate in this kind of work," he says.

Vulcan Imaging as a whole, says Blackman, simply wants to help. "We have a calling from the group to serve the community, especially those who can't help themselves."